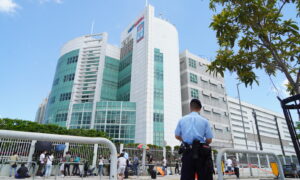 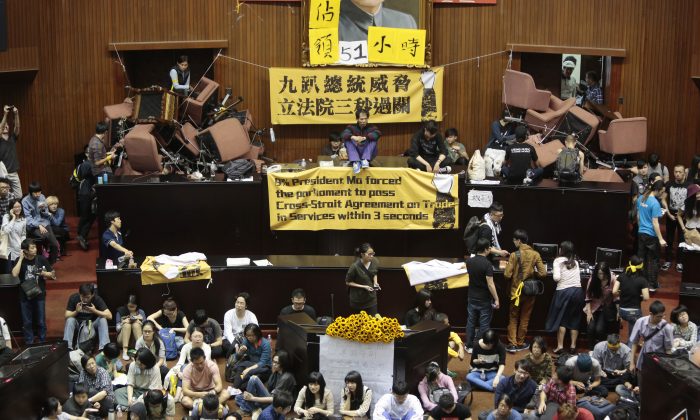 Students and protesters occupy the Taiwanese Parliament on March 19, in Taipei, Taiwan, to protest against the ruling Nationalist Party's attempt ratify a controversial service and trade agreement with China. Over 200 students broke into the Taiwan Parliament and took over the main chamber. (Ashley Pon/Getty Images)
China

Hundreds of protesters in Taiwan stormed the nation’s legislative chambers on Tuesday night, barricading themselves inside in defiance of attempts by the government to push through a controversial trade deal with China.

The immediate cause of the outrage was due to the attempt by a lawmaker with the Nationalist Party, which is currently in power, to expedite the passage of the new Cross-Strait Services Trade Agreement with China. Some groups in Taiwan believe the pact would destroy jobs and decimate small businesses, the lifeblood of the Taiwanese economy.

The outburst is the most tangible demonstration so far of discomfort running deep in Taiwan over the growth of relations with China and the Chinese Communist Party, whose system of political controls and repression stands in stark contrast to the boisterous freedoms that Taiwan enjoys.

Nationalist Party (called “Kuomintang” in Chinese) legislators had previously agreed to a clause-by-clause deliberation of the trade agreement. But on March 17 Chang Ching-chung, a lawmaker with the Nationalists, amidst one of the shouting matches that is common in the Legislative Yuan (Taiwan’s parliament), declared the review completed before it had begun.

The following evening, furious students and civic groups stormed the Legislative Yuan and set up shop. Though there is little chance that the law would not have been passed—there are 65 Nationalist legislators in the 113-seat body—protesters said they were bitterly opposed to the attempt at skirting legislative review.

Attempts by police to dislodge the occupants failed, and new opponents to the government’s policies streamed in. Hundreds remain inside the chambers, blocking entrances with stacks of chairs, while over 10,000 gathered outside in support.

One of the protesters set up a camera, connected to the Internet, overlooking the Legislative Yuan. It provides a live video and audio feed of events in the chamber. Young women sitting next to the camera can be heard prattling about what the police and protesters are doing, while protesters chat, mill about, and sleep in the legislative chamber below, their placards propped up against the walls or hung over desks.

Taiwanese worry that the Services Trade Agreement would give large Chinese companies access to the Taiwan domestic market that local businesses would not be able to compete with. A statement by student leaders on Thursday said that “Taiwanese small and medium-sized enterprises will face challenges from competition with Chinese-invested companies that have abundant capital and use vertically integrated business models.”

It continued: “We strongly protest against the President Ma Ying-jeou administration—which now has a low approval rating—seizing the legislature to have it approve the service pact in such a violent way and giving away the nation’s future,” according to a translation by the Taipei Times.

Taiwan is a self-governing country that became a democracy after decades of dictatorial rule by the Nationalist Party, who fled to the island after losing the civil war in China to communist insurgents. The Chinese Communist Party claims Taiwan to be part of the People’s Republic of China and says that it reserves the right to use military force to seize control of it.

Since 2008 the current president of Taiwan, Ma Ying-jeou, has pursued a range of policies that have brought Taiwan closer to China. The calming of tensions has been welcomed, but many Taiwanese are concerned about the Communist Party’s political designs on Taiwan. Taiwanese already complain of erosion of press freedom by business interests close to China. A recent spate of knife attacks by anonymous thugs in Hong Kong raises did not help perceptions of what closeness to China can entail.

A Hong Kong tourist who observed the protest was quoted in the Taiwanese media ETtoday saying “Hong Kong people have already lost their homes. Taiwan must stand guard.”