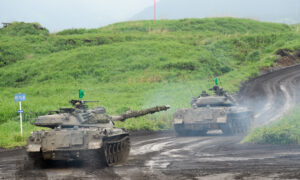 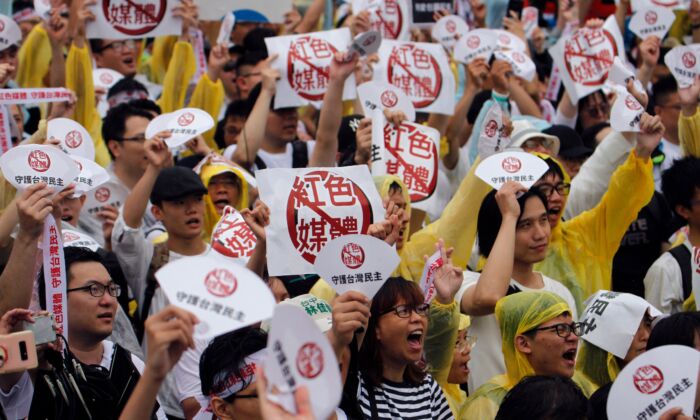 Protesters hold placards with messages that read “reject red media” and “safeguard the nation's democracy” during a rally against pro-China media in Taipei on June 23, 2019. (Hsu Tsun-hsu / AFP)
Asia & Pacific

“Our story deserves to be told by Taiwanese voices,” said the president of the self-ruled island, describing the launch as “an exciting new initiative.”

Taiwan needed a platform to highlight to the world the island’s “aspirations to contribute to the international community,” Taiwan President Tsai Ing-wen said in a recorded message for the opening ceremony at a Taipei museum.

Taiwan has been a de facto independent country for more than seven decades, with its own military, democratically-elected government, and constitution. Yet the Chinese regime claims the island as its own and has been pinching Taiwan’s international presence.

Taiwan participated as an observer in the World Health Assembly, the World Health Organization’s decision-making body, from 2009 to 2016 until the country was barred in 2017 because of Beijing’s objections.

In 2018, Beijing demanded that foreign companies list Taiwan as a part of China on their website’s drop-down menus, BBC reported. Companies that failed to cooperate, from airlines to clothing brands, would be blocked from doing business with China.

China has also carried out maneuvers in waters and airspaces, and routine military drills, and jet incursions near the island.

Taiwan’s Legislative Speaker You Si-kun said during the opening: “For a long time, the Chinese Communists have been squeezing Taiwan’s international space and creating a false image of Taiwan, leading to the diplomatic challenges Taiwan now faces.

“In recent years, however, there has been a dramatic change in how the world sees the Chinese Communists. Major democracies around the world are now raising the alarm over China’s rise.”