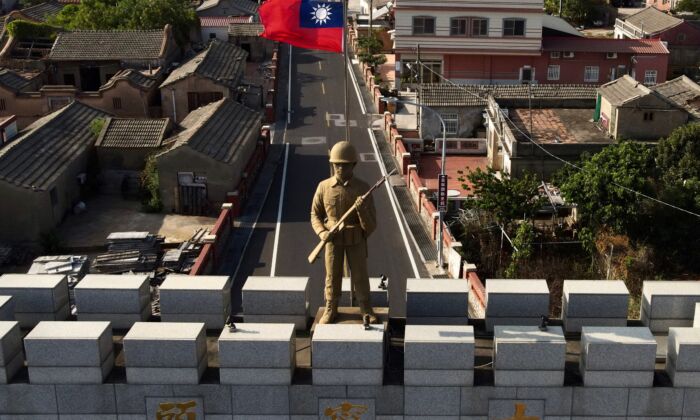 A military statue and Taiwanese flag atop an arch built in remembrance of the Battle of Guningtou in 1949 at Taiwan's Kinmen islands on October 20, 2020. Kinmen islands lie just 3.2 kms (two miles) from the mainland China coast in the Taiwan Strait.(Sam Yeh/AFP via Getty Images)
Taiwan

Taiwan’s military issued a “war survival” handbook on April 12 advising citizens how to respond to and protect themselves from a war situation, as Russia’s invasion of Ukraine increases worries about a possible Chinese regime incursion into the island.

The handbook outlines how residents can find bomb shelters using a phone app, how to stockpile supplies for wartime, and information on reserve force mobilization.

“The pamphlet was to provide the public with emergency response measures in the event of a military crisis or possible disasters, so that they can enable safety preparedness and help themselves survive,” said Liu Tai-yi, an official of the ministry’s All-out Defence Mobilisation unit.

The 28-page guide issued by Taiwan’s Ministry of National Defense will be updated with localized information, including shelter sites, hospital locations, and shops for daily needs, Liu told an online news conference.

“Plan ahead in all affairs and you shall be successful,” said Confucius. The new guide sample from our mobilization agency provides a solid ground for our local governments to instruct citizens on what to do when emergencies including disasters and military assaults come. pic.twitter.com/S1qaO5Hpqj

Taiwan launched the All-Out Defense Mobilization Agency last December as part of its efforts to boost the reservists’ capabilities in the event of war.

While the island nation hasn’t reported any sign of an imminent invasion, the Chinese regime has escalated military harassment by flying warplanes near the island on a regular basis over the past two years. The latest incursion occurred on April 11, when two Chinese military aircraft entered Taiwan’s southwest air defense identification zone.

China’s ruling Communist Party views the self-ruled island as its own territory that it will take by force if necessary.

Defence Minister Chiu Kuo-cheng said last month that they are considering extending the compulsory military service to a year. Currently, every male citizen over 18 is required to complete a four-month training course.

On April 6, the United States approved a possible $95 million sale of equipment and services to boost the island’s air defenses. Washington is the biggest backer of the democratic-governed island, and is bound by the Taiwan Relations Act to provide Taipei with the means to defend itself.

Such arms sales always draw the wrath of the communist regime. In February, Beijing leveled sanctions against two U.S. arms suppliers, Raytheon and Lockheed Martin, for selling arms to the island. The move comes less than two weeks after the U.S. announced a possible $100 million military deal for Taipei.

On April 7, some Japanese and Taiwanese media reported U.S. House of Representatives Speaker Nancy Pelosi was scheduled to visit Taiwan on April 10. While the trip wasn’t confirmed by Pelosi’s office or Taipei, the Chinese regime’s foreign ministry’s spokesperson warned it would respond by taking “strong measures.” The reported visit was canceled after Pelosi tested positive for COVID-19.