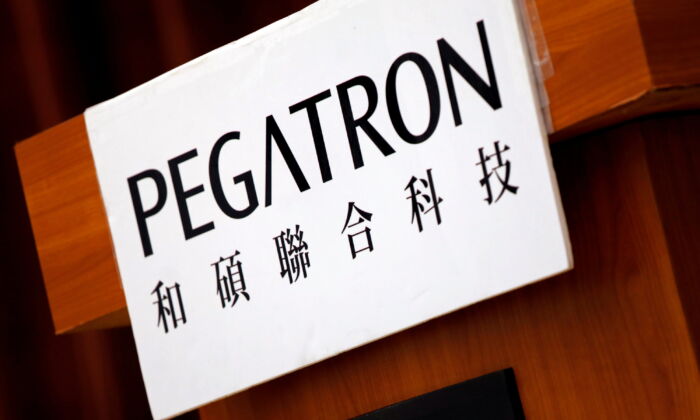 The Taiwanese electronics company Pegatron, one of the leading manufacturers of the Apple iPhone, has suspended operations at two of its Chinese factories as a result of lockdowns and restrictions imposed during a new wave of the CCP (Chinese Communist Party) virus in the Shanghai metropolitan area.

On April 12, Pegatron announced that they would temporarily suspend operations at their factories in Shanghai and nearby Kunshan, even as the Shanghai municipal government announced a day earlier a limited easing of lockdowns.

“The date of factory resumption is to be advised by the local government,” the company said in an official statement, noting that they would work with local officials to resume operations as soon as possible.

Pegatron is only the latest company to suspend operations at its Chinese factories: Both the MacBook manufacturer Quanta and the iPad manufacturer Compal Electronics have temporarily closed their factories in select Chinese cities, according to reports from the Japanese newspaper Nikkei.

Decoupling From China’s Economy ‘Is the Future’: Analyst

These factory closures are a reflection of the economic toll the CCP’s lockdowns have imposed on China, contributing to an overall economic slump, one which has impacted global supply chains.

Prior to late March, Shanghai had taken a more moderate and relaxed approach than most of mainland China in response to the new wave of the CCP virus that has afflicted the country. However, the “flexible” public health policy abruptly changed on March 28 as a result of direct intervention from the central government in Beijing, which demanded a more draconian response.

The severity of the Shanghai lockdowns has caused some measure of panic throughout China, as the masses have begun stockpiling groceries in fear that they will be unable to attain food if their cities come under lockdown.

These harms are especially egregious given the relative benignity of the Omicron strain which currently afflicts China. According to government data, the vast majority of the cases have been “asymptomatic:” for April 12, Shanghai reported 25,141 asymptomatic cases, as opposed to just 1,189 symptomatic cases. The Chinese regime has not acknowledged any deaths from the current wave of the virus.

While the credibility of these government figures is questionable, they raise the question of why the Chinese state would insist on such costly measures to prevent the spread of a relatively low-cost outbreak. The answer may lie in factional battles within the CCP leadership, which have incentivized the current president to stay the course on his status quo policy even as economic and humanitarian pressures mount.

The inner machinations of the Chinese Communist Party are notoriously secretive, but there is sufficient evidence for informed speculation about the political machinations behind these measures and the possible reasons that the Chinese state is imposing such draconian measures for a relatively benign strain of the CCP virus.

Shanghai is traditionally the stronghold of the eponymous Shanghai clique, an informal political faction that formed around the patronage network of former General Secretary Jiang Zemin during his tenure as mayor of Shanghai. Given the city’s dependence on international capital, the Shanghai clique has generally favored policies that are friendly to big businesses in China, so it is not altogether surprising that the local government would take a more measured approach to the economically costly lockdowns that have been favored in other major cities.

While Chinese leader Xi Jinping initially rose to power as a supporter of the Shanghai clique, his rule has caused tensions with his former patrons from that faction, as Xi has seemingly marginalized the old political factions by prosecuting members of the Shanghai clique in his anti-corruption campaign, replacing the old guard with personal loyalists and alumni of his alma mater, Tsinghua University.

There is good reason to believe the shift in Shanghai’s policy regarding the CCP virus is a result of direct intervention by paramount leader Xi, for whom maintaining a consistent policy on the virus he has presided over is seen as a sign of political legitimacy.

“The country’s central leadership no longer tolerates iconoclastic policy implementation—instead, local governments are instructed to ‘pull out all stops to control the spread of the virus in the shortest time,'” Council of Foreign Relations global health analyst Yanzhong Huang wrote in a column for CNN. “The new directive—which apparently was instructed by President Xi Jinping—favors heavy-handed pandemic control measures, such as mass PCR testing, forced quarantines, and city-wide lockdowns.”

Currently, Xi is undertaking an ambitious bid for a third term as CCP leader, breaking a decades-old precedent set by Deng Xiaoping that Chinese leaders should only be allowed to rule for two five-year terms. While term limits for CCP leaders were abolished in 2018, reports indicate ongoing opposition to Xi’s leadership from opposing CCP factions, which could become a liability in the political maneuverings necessary to secure a third term. For Xi, holding the line on his prior CCP virus policy is a matter of saving face, rather than undergoing the politically risky embarrassment of changing course in the midst of the pandemic.

Thus, the paramount leader of Communist China has doubled down on the draconian “zero-COVID” policy in China’s financial hub, even as the economic costs continue to metastisize and thousands of Shanghainese face food shortages. That the central government should remain steadfast in their insistence on “zero-COVID” policy is a testament to the political inertia typically of Communist Chinese politics, making for brittle and sometimes deadly policies for the Chinese people.