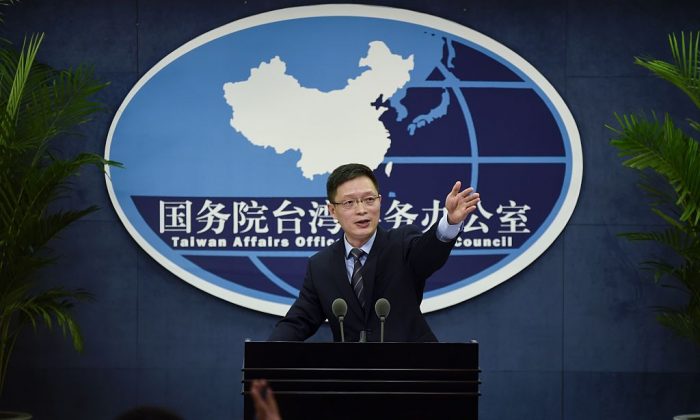 An Fengshan, spokesman for the State Council's Taiwan Affairs Office, gestures toward the media at a press conference in Beijing on Dec. 28, 2016. (Wang Zhao/AFP/Getty Images)
Asia & Pacific

Taiwan in Uproar Over Beijing’s Encroachment on Academic Freedoms

TAIPEI, Taiwan—The Chinese regime is extending its overarching academic censorship to its democratic neighbor across the strait.

An unidentified mainland Chinese exchange student studying at Taiwan’s Fu Jen Catholic University, located in New Taipei City, recently filed a complaint with the Beijing-run Taiwan Affairs Office, an administrative agency that deals with issues regarding Taiwan. The student complained about how some professors in his class were sharing their political views, according to local media reports.

While it isn’t known precisely what the professors may have said, certain topics involving Taiwan are considered taboo by Beijing. For example, discussion about calls for Taiwan to formally announce its independence from mainland China is forbidden—since Beijing considers the self-ruled island one of its provinces that must be united with the mainland, by military force if necessary.

Taiwan is a de-facto independent, democratic country with its own constitution, military, elected officials, and currency, after successfully hosting its first presidential election in 1996.

In response to the student’s complaint, the Taiwan Affairs Office soon filed a protest with Taiwan’s University Entrance Committee for Mainland Chinese Students, an agency run by Taiwan’s Ministry of Education that handles issues related to mainland Chinese students studying on the island.

The office demanded that the entrance committee reduce the number of enrollment spots allocated to Fu Jen for mainland Chinese students.

The committee subsequently passed the protest on to officials at Fu Jen Catholic University, asking the school to clarify the situation. In response, university officials drew up an official document agreeing to the agency’s demands, according to local media, although they didn’t further elaborate on the contents of the requests.

The university also sent the document via email to different academic departments. The email message stated that the document was sent in order to “uphold the quality that students receive their education,” and asked teachers “not to overly speak about topics not related to the academic course.”

The university email that indicated its capitulation to Beijing authorities was first made public by Ho Tung-hung, an assistant professor of psychology at Fu Jen, after he posted a screenshot of the email to his Facebook page on Feb. 19.

Taiwan’s Ministry of Education quickly responded, calling the university and the entrance committee’s actions “inappropriate,” in a statement released on Feb. 19, according to Taiwan’s Central News Agency.

The ministry asked that both the committee and Fu Jen “make amends to their errors, respect the professionalism of university teachers, and safeguard the education rights of students.”

“If our own [Taiwanese] government is not even allowed to interfere with academic freedom, how could we tolerate a foreign regime, like China’s, to make irresponsible comments about Taiwan’s academic environment. This is extremely inappropriate,” he said in a phone interview with the Taiwan branch of NTD, part of the Epoch Media Group.

Wang suggested that Taiwanese authorities be allowed to revoke the rights of foreign exchange students to study in Taiwan if they report incidents to Beijing authorities as the most recent mainland Chinese student did.

“We would never allow the Chinese regime to use its dictatorial and anti-freedom tactic to interfere with Taiwan’s academic freedom,” he said.

In March 2017, another Taiwanese private university, Shih Hsin University, faced similar criticisms when it signed an agreement with three mainland Chinese schools—Jiangsu Normal University, Zhejiang Sci-Tech University, Communication University of Zhejiang—promising that courses offered to mainland exchange students at Shih Hsin wouldn’t include any mentions of “One China One Taiwan,” “Two Chinas,” and “Taiwan’s independence,” according to reports by local newspaper Liberty Times.

“One China One Taiwan” and “Two Chinas” all hint at Taiwan being a formal independent country.

At the time, Taiwan’s Ministry of Education also criticized Shin Hsin for failing to report the agreement to the ministry before signing. According to local law, any cooperative agreement with a mainland Chinese school must be filed in advance with the ministry.