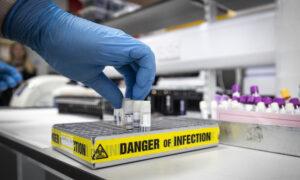 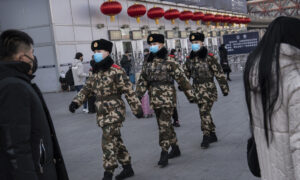 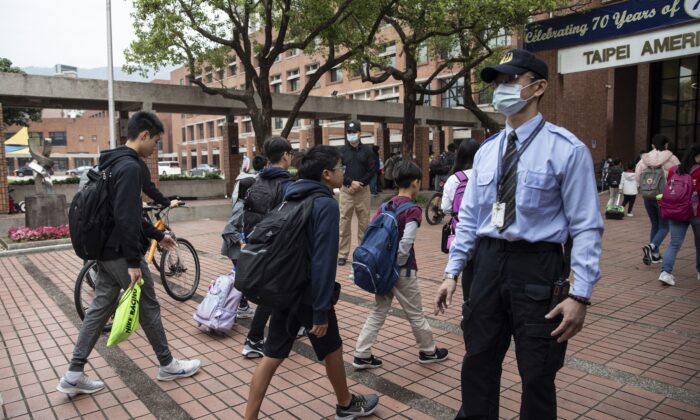 Students enter the Taipei American School in Taipei, Taiwan, on March 18, 2020. Taiwan, Singapore, and Hong Kong have had more success in battling the COVID-19 pandemic that other jurisdictions can learn from. (Paula Bronstein/Getty Images)
Viewpoints

Like the Titanic striking a massive iceberg in 1912, a deadly novel coronavirus, later named COVID-19, struck the central Chinese city of Wuhan in late 2019. First revealed by local doctors in early December, the CCP (Chinese Communist Party) virus spread like a global tidal wave and has now infected people in 152 of the 193 U.N. member-countries.

Amid the gloom and doom scenarios painted by some media—both traditional and social—the world’s policy makers, as well as individual citizens, must pay close attention to what some governments did to restrain the pandemic, and to examine why in others it took such a heavy toll.

Perhaps we can learn lessons from the first group of countries and prevent the global ship—that so many of us thought was unsinkable—from hitting more rocks.

Taiwan, Hong Kong, and Singapore—all in southeast Asia with strong language, economic, and cultural ties to China and situated in close proximity to it, have managed to date to keep their deaths to single digits.

They did this primarily by vigorous testing and tracing of infected persons.

Taiwan is effectively barred from both the United Nations and the World Health Organization by the Beijing party-state through continuous leveraging of its permanent membership on the Security Council. Despite this, it has proven to be the most effective (along with Hong Kong and Singapore) in protecting its nearly 24 million citizens from the disease.

Although both Italy and Taiwan confirmed their first cases of the CCP virus in almost the same week, as of March 24 Italy tragically had about 47,000 active cases and 4,032 deaths, while Taiwan had about 215 confirmed cases and only two fatalities.

Almost 100 initiatives implemented by Taiwan’s national government include screening flights from Wuhan as early as Dec. 31; banning Wuhan residents on Jan. 23; suspending tourist visits to Hubei province on Jan. 25; and barring all Chinese arrivals on Feb. 6.

The government in Taipei merged citizens’ recent international travel records with their digital health-insurance files and allowed doctors and pharmacists access to the information. Stiff fines were applied to quarantine violators.

Singapore took a similar serious approach, deploying police to track down the contacts of infected residents and using government-issued cellphones to keep tabs on those in quarantine.  Three local doctors said recently in a journal paper that “relative normalcy of day-to-day life has been maintained.”

The general approach in all three jurisdictions was a range of aggressive measures based on the view that COVID-19 would spread fast and widely. This meant testing for infection quickly. Today, testing capacity for COVID-19 in Taiwan has reached 3,400 samples daily.

Violators of home isolation regulations were fined up to US$5,000. The price of surgical masks was brought down to US$.20 and production greatly increased

By contrast, most other countries opted for delayed containment strategies, hoping the emerging international calamity would prove no worse than SARS in 2002-2004 and Ebola in 2014-2016. Unfortunately, reality proved otherwise. According to Johns Hopkins University, as of March 23 there were more than 350,536 confirmed cases and 15,328 deaths worldwide.

Another major need from all governments is transparency, early warnings, and clear, honest, and effective communications with the public.

According to the South China Morning Post, government data in China indicates that the first COVID-19 case was identified in November 2019. A University of Southampton (U.K.) study has concluded that if Beijing had revealed the facts and acted three weeks earlier than it did, the number of cases would have been reduced by 95 percent.

David Matas, a member of the Canadian delegation to the U.N. conference on the establishment of an International Criminal Court, notes that China is subject as a state party to the Biological Weapons Convention:

“In my view, non-reporting is a form of retention in violation of the Convention. The United States is also a state party to the treaty. If the U.S. found China acted in breach of its obligations deriving from the provisions of the Convention by its delay in reporting the coronavirus, the U.S. could lodge a complaint with the Security Council.”

While the party-state of China is probably in violation of  the Convention, individual Chinese, whether residents of China or in diasporas around the world, are in no way to blame for the catastrophic effects of the state-party’s mishandling of the situation. Many of them have been heroic in their conduct and care for others.

In Canada and elsewhere, medical professionals, first responders, caregivers, and populations as a whole are struggling with a new health catastrophe, often with inadequate knowledge and equipment. The lessons from the three Asian leaders on the present health crisis are invaluable.