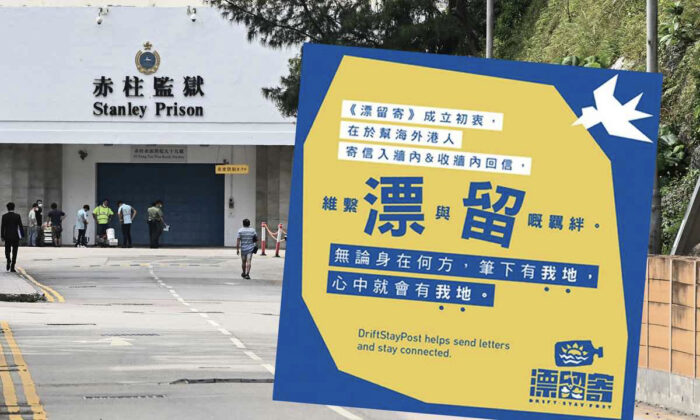 Hong Kong people in Taiwan organise the "DriftStayPost" programme to collect letters from overseas Hong Kong people and send them to inmates on their behalf. Its aim is to let those locked inside the prison walls know they are never alone. (The Epoch Times)
Hong Kong

It is now three years after the 2019 anti-extradition movement in Hong Kong, and the Hong Kong authorities are still chasing and prosecuting the protesters. To date, nearly 3,000 of them have been prosecuted, with more than 1,000 convicted.

While in prison they can only communicate with the outside world by letters. On the other hand, even though many Hong Kong people have moved overseas in recent years, a lot of them still care about their like-minded fellows in Hong Kong.

In view of this, some of them have organised this “DriftStayPost” programme in Taiwan to collect letters written by overseas Hong Kong people and send them to the inmates on their behalf. The aim is to let people currently locked up inside the prison walls know that there are still people who care about them. At the same time, it also provides one way that overseas Hong Kong people can still feel reconnected to Hong Kong.

“Peter Boy,” the person in charge of this programme, said during an interview with The Epoch Times on Aug 14, that he had such an idea of ​​sending and receiving mails on other people’s behalf in early 2021. He did organize a similar card-writing event during Christmas in 2020, but the response was mediocre at the time.

He thinks that Hong Kong people may encounter various sorts of difficulties adapting to a new life overseas, so he hopes to go one step further and organize this letter-writing activity to connect overseas Hong Kong people with Hong Kong again. “As a start, we can encourage everyone to write. As a next phase, we can help the reader to send theirs back. In doing so, you can do all the matching, and in between, we can encourage everyone to continue writing, so on and so forth.”

Letter to Bring Hope to the Inmates

Peter Boy said the service of his group is to collect letters from overseas Hong Kong people and send them back to protesters now in prison in Hong Kong. If a letter does not have a specific target audience, it will help match pen pals, but it all depends on whether there is a reply. Team members from his group had also sent letters to the prisons, hoping to let people inside there know there are people who still care about them. They also hope that through all such activities, Hong Kong people living overseas can realize why they “can’t go back home” too.

The group chose a yellow background for their logo, with a drifting bottle on top and marked with the words “Draft.Stay.Post” below it, in both Chinese and English. Peter explained to us the logo design concept. The drifting bottle symbolizes sending the letter back inside a bottle. The sun inside the bottle symbolizes the hope and light that the letter can bring to the people who receive it.

The Chinese word for “Stay (the middle one)” is also specially structured. You can see there is a pen in one of the strokes that symbolizes the idea of “writing your mind with your hand.” He also pointed out that his name, Peter indeed rhymes with the “P” sound of “Drift” spoken in Chinese (Cantonese).

The Facebook page of  “DriftStayPost” was only launched in the middle of last month (July 2022), with sister, and receiver, sites in Norway, Germany, Taiwan, Belgium, and the United Kingdom, such as “Asgard Groceries” in the UK, and “Hongkongers in Deutschland e. V.” in Germany.

Peter Boy said that the team has started to work, but still, not many people know about it. For the time being there are only a few letters sent from Taiwan, but they are discussing cooperation with different overseas Hong Kong people’s organizations. That includes Australia-Hong Kong Link, and other countries and regions such as the Netherlands, and North America.

Peter mentioned that one female friend of his is awaiting sentence later in 2022. He pointed out that this friend used to be cheerful and positive, but recently she felt increased pressure, and sometimes even felt that she had been abandoned by others.

He said that even if overseas Hong Kong people encounter difficulties, the freedom they have can still provide the impetus to let them believe they can always find a solution. On the contrary for those trapped inside the prison walls the situation is more like the “meat on a chopping block.” It is a sacred duty of those outside [not in prison] to offer help to them. With this in mind, acts like “writing a letter is such a simple thing that is already very important to them (so let’s do it right away).”

In fact, Peter Boy also participated in the 2019 protest and was forced to drift overseas after that. He said that he thanked the siblings still in Hong Kong for having “the guts to stay,” and “one day we will definitely return to the bottom of the pot (the overhanging structure at the front of the HK Legislative Council) and be reunited.” “Until then, everyone just takes good care of yourself.”

Regarding the group’s future plans, he revealed that they will hold a “What I Should Do?” rally and film screening in Taipei on Sept. 28, 2022. Former Hong Kong Legislative Councillor Ted Hui Chi-fung will attend and deliver a speech via teleconferencing. Peter Boy said that the team will call on everyone to write letters at the scene and will also receive letters on the spot. He believes that more people will participate in the future. “Social movements take time to brew and groom.”