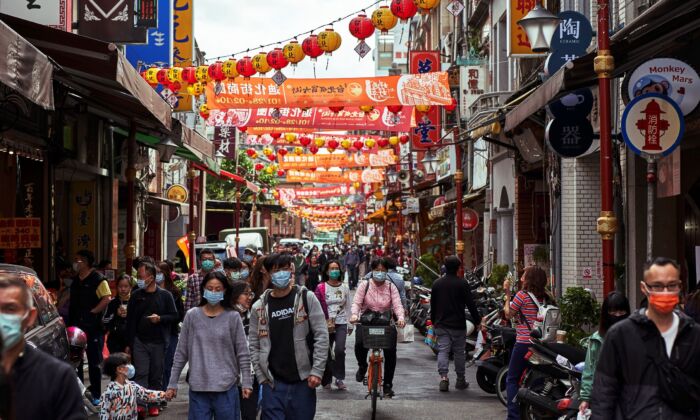 Shoppers walk beneath lanterns strung up as people prepare for Chinese New Year at Dihua Street in Taipei, Taiwan on Feb. 10, 2021. (An Rong Xu/Getty Images)
Taiwan

Taiwan GDP Storms to Decade-High in 2021, Fuelled by Strong Exports

Taiwan’s economy grew at the fastest pace in over a decade last year, driven by strong tech exports during the COVID-19 pandemic to feed the prevailing work-and-study-from-home trend.

The full-year gross domestic product (GDP) growth in 2021 surpassed the previous forecast of 6.1 percent up to 6.3 percent, fueled by a 4.9 percent year-on-year rise in the fourth quarter, according to the preliminary data (pdf) released by the government’s statistics agency on Jan. 27.

It turned out to be the strongest result since a 10.3 percent expansion in 2010 after the global financial crisis. The previous year records a 3.1 percent gain.

“Robust external demand, our strong industrial position, and the U.S.-China technology dispute have meant some businesses with facilities overseas have moved production back to Taiwan,” senior statistics official Wu Pei-hsuan said at a briefing following the release, Bloomberg reported.

As a key hub in the global technology supply chain for giants such as Apple Inc, Taiwan’s economy has outperformed many of its regional peers due to the robust demand for its high-tech products. In 2021, Taiwan’s exports rose 29.4 percent to a record high, as the persistent thirst for semiconductors around the globe has also filled Taiwan chipmakers’ order books, boosting domestic production.

Taiwan will release on Feb. 24 its revised GDP figures, including growth estimates for the full year.

Being Taiwan’s top trading partner, China records a slowdown in GDP expansion throughout the year.

China announced its GDP grew 4 percent in the final quarter of 2021 from a year earlier, less than the 4.9 percent gain in the third quarter and a further deceleration from the 7.9 percent growth in the second quarter and 18.3 percent expansion in the first quarter. Although the country claimed its GDP grew 8.1 percent during last year, market watchers doubt the credibility.

“I think the number might be a little too high,” he told the Chinese-language edition of The Epoch Times in a recent interview. “The main reason for the widespread skepticism about the figure is the less-than-ideal overall situation in China last year,” he said, flagging impacts of the domestic power crunch, regulator curbs, and sporadic COVID-19 outbreaks.

Hotel owner Li Hua (pseudonym) closed his business in southern China last month. “I know many stores closed and changed owners, but the problem remains unsolved,” he told The Epoch Times, worrying about the loss of business confidence.

“Most industries are actually laying off a large number of workers,” said Prof. Frank Tian Xie from the University of South Carolina, Aiken. “Consumption is very pent up and weak for Chinese people.”

Besides the sluggish consumption at home, the global need for Chinese products would ease with more foreign production chains moving out from the territory, Xie said.

Yi Ru and Reuters contributed to this report.