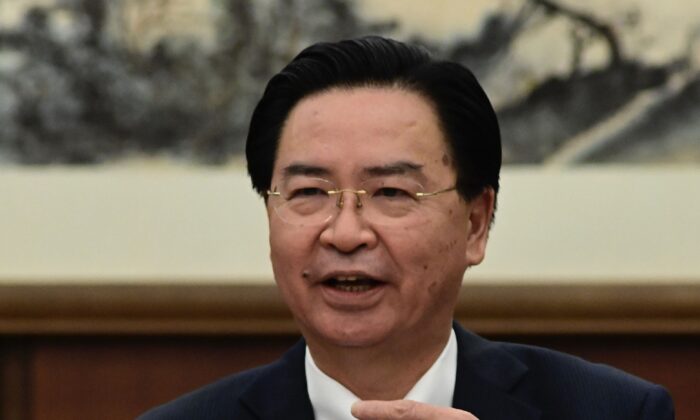 Taiwan Foreign Minister Joseph Wu has thanked Australia for directly calling on the Chinese regime not to invade Taiwan and called for closer ties with Canberra.

Speaking to News Corp’s The Australian, in Taipei, Wu complimented Australia’s spirit in standing up for others but said that it was Taiwan’s responsibility to defend itself.

“As I say all the time, I have a kangaroo in my heart,” Wu said, pointing to his kangaroo lapel pin.

Wu praised Australia’s “natural passion,” as seen in its history of taking up arms to protect freedom and democracy.

“Australia is so far away from the rest of the world, but look at Australia’s record,” he said.

“Participating in battles, or wars, in terms of safeguarding freedom and democracy. Also, in terms of fighting together with allies. It’s very touching.”

The Taiwanese foreign minister praised Australia for its concern over Taiwan.

“There’s a natural passion of the Australians … When other fellow democracies are threatened, they will like to speak out,” he said. “Australia is not alone in supporting Taiwan in that way.”

Wu said that Taiwan was not “asking Australia to participate in a war that Taiwan is involved in,” but that during this period of time, “before anything happens,” he said the support of the Australian people for the Taiwanese people—”either international participation or urging for the peace and stability in this area”—was “all very good encouragement.”

The Taiwanese foreign minister’s comments come after Australian Defence Minister Peter Dutton warned that Australia risked losing its sovereignty and becoming a “tributary state” to China should the country’s communist regime invade Taiwan and become the dominant power in the region.

Dutton warned that, in the absence of counter pressure, Beijing would transform the regional order which had made Australia prosperous and safe.

“In the absence of a counter pressure, the Chinese government becomes the sole security and economic partner for Indo-Pacific nations,” he told the National Press Club on Nov. 26.

“That is a perilous military and economic situation for our country and many others.

“Does the Chinese government wish to occupy other countries?  Not in my judgement.

“But they do see us as tributary states. And that surrender of sovereignty and abandonment of any adherence to the international rule of law is what our country has fought against since Federation,” he said.

Meanwhile, Wu has called for even greater links at even higher levels between Taipei and Canberra.

Australia has not had formal diplomatic ties with Taiwan since 1972 when Labor Prime Minister Gough Whitlam shifted allegiance to communist China.

Since then, Australia has maintained informal ties, but Wu has suggested that it might be time to change this by increasing the points of contact between Australian and Taiwanese officials.

“Even though we do not have formal diplomatic ties with each other, we engage in all kinds of co-operation,” he said.

“I think it is probably time for us to think about how to upgrade the contact between the two sides in a way that senior (Taiwanese) officials, very senior officials, will be allowed to visit Australia or you would allow more senior (Australian) officials, cabinet officials, to come to Taiwan to engage in their substantive discussions with us.”