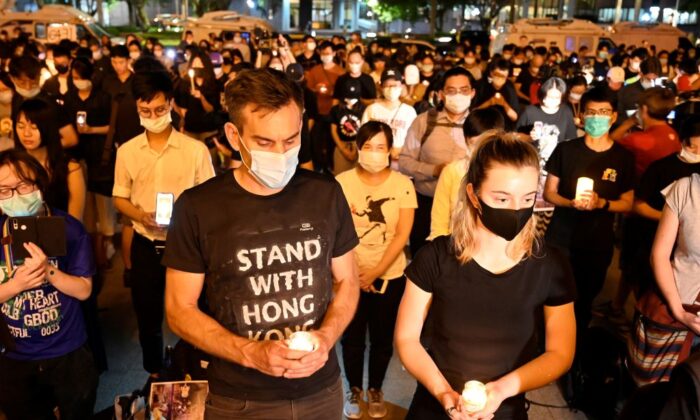 Ai Kezhu and Lu Qiang, who are reporters for China’s state-run Southeast Television, a broadcaster based in China’s Fujian Province, acted as hosts of political talk shows produced in Taiwan without disclosing such job descriptions when they applied for media credentials, according to Taiwan’s Mainland Affairs Council (MAC), which is the island’s top government agency in dealing with cross-strait affairs.

Taiwan’s Ministry of Culture (MOC), which is tasked with issuing and revoking press credentials to Chinese reporters, said Ai and Lu should have reported to the ministry any change to their duties in Taiwan. MOC said the two reporters’ media credentials also expired on June 30 and July 2.

They first arrived in Taiwan in December 2019, according to local media.

The MAC didn’t say whether the content of the two reporters’ talk shows also figured into the expulsion from Taiwan.

While their talk show programs can’t be seen on Taiwan’s cable networks, Southeast Television has uploaded the political talk shows to its YouTube channel. In one recent episode of the talk show hosted by Ai, a Taiwanese pundit criticized the newly established Taiwanese government agency, the Taiwan-Hong Kong Services and Exchange Office, as having only “symbolic” value.

The Taiwanese pundit also said that if the Taiwanese government was “very proactive” in supporting the people of Hong Kong, the people in Taiwan “would find it unacceptable.”

The Taiwan-Hong Kong Services and Exchange Office went into operation on July 1, to help Hongkongers fleeing political persecution to study, work, or invest in Taiwan.

Since mass pro-democracy protests erupted in Hong Kong last year, thousands of protesters have been arrested. Many fled to neighboring Taiwan, where there is immense public support for the movement. The Taiwan Association for Human Rights said that more than 200 Hong Kong protesters have fled to Taiwan since June last year, according to local daily The Liberty Times.

In late May, Taiwan President Tsai Ing-wen announced that her administration would set up a new office to assist such protesters who have fled to the island.

Soon after, Beijing imposed a national security law for the territory, leading to fears that critics of the Chinese regime would be prosecuted and sentenced.

In response to the expulsion, Taiwan’s Premier Su Tseng-chang said at a July 4 press conference that “while our press freedom is globally recognized, the government must safeguard the country’s interests and the safety of its citizens. So reporters from any country must obey local regulations.”

On July 4, U.S.-based political commentator Xia Xiaoqiang wrote on his personal blog that he found it shocking that the aforementioned pundit’s tone wasn’t much different from views that are expressed on Chinese state-run media.

“This [episode] shows that Southeast Television’s mission in Taiwan is to promote so-called ‘voices of Taiwan’ that the Chinese Communist Party (CCP) approves of and wants its citizens to hear,” Xia wrote.

Wang Ting-yu, a lawmaker with the ruling Democratic Progressive Party, told the Taiwan edition of The Epoch Times that the government needs to do more than expelling mainland Chinese reporters who violate regulations.

Wang said he will demand that Taiwan’s National Security Bureau and Ministry of Justice Investigation Bureau look into whether the two expelled reporters have violated local laws such as the National Security Act, which penalizes the establishing of organizations or gathering of sensitive information to benefit China, or the treason article under the criminal law.

Wang added that the investigations should extend to other Chinese reporters still in Taiwan.