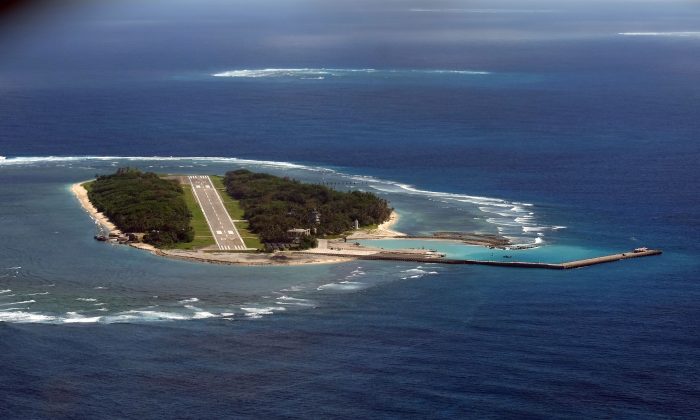 A view of Taiwan-controlled Taiping island in the South China Sea on November 29, 2016. (Sam Yeh/AFP/Getty Images)
By Paul Huang

Recent media reports of an alleged proposal to lease a Taiwan-controlled island in the South China Sea to the United State as a military base are completely groundless, according to Taiwan. The allegation originated from a pro-Beijing politician in Taiwan who started to circulate the rumor as early as 2016, The Epoch Times has learned.

Taiping Island, also known internationally as Itu Aba, is the largest of the Spratly Islands in the disputed South China Sea. The island has been controlled by Taiwan for decades, though China, Philippines, and Vietnam all include it as part of their sovereign claims. Taiwan has built extensive infrastructure on the island, which includes a military runway, while also maintaining a coast guard garrison there.

Next Magazine, a Taiwanese tabloid publication, first reported on June 4 that an unnamed “defense think tank” affiliated with Taiwan’s ruling Democratic Progressive Party has been studying a policy “proposal” to lease part of Taiping Island to the United States military, under the guise of supporting U.S. humanitarian assistance missions.

By leasing the island, the proposal hopes to draw the United States into helping Taiwan in the event of a confrontation with the People’s Republic of China, the report said, without citing any named sources.

The report was then circulated widely among Chinese-language media last week. Many publications in mainland China used provocative headlines to create a narrative that Taiwan is selling out the “Chinese island” to the United States against China. The story was also reported by the Hong Kong-based South China Morning Post, again without verifying the source.

In response, Taiwan said on Sunday that the alleged proposal is fake news and completely groundless. The Taiwanese government has never considered leasing Taiping Island to a foreign country, according to Taiwan’s Ministry of Foreign Affairs spokesperson, who also reiterated Taiwan’s established position on the South China Sea dispute: calling on all parties to adhere to existing international law and to respect freedom of navigation.

The Epoch Times has learned from a defense researcher affiliated with the Institute for National Defense and Security Research (INDSR) that the source of Next Magazine’s allegation originated from a pro-Beijing politician in Taiwan named Chiu Yi, who first started circulating the rumor in 2016 as a way to attack the ruling Democratic Progressive Party (DPP), which holds a more skeptical view toward China.

In a previous instance Chiu Yi alleged, without offering any evidence, that DPP President Tsai ing-wen’s policy of building the capacity for humanitarian assistance on Taiping Island was a prelude to leasing the island to the United States.

Yi, who was a controversial legislator in Taiwan’s parliament from 2008 to 2012, has a record of spreading conspiracy theories against Taiwanese politicians and public figures who oppose Beijing’s incursions on the democratic island nation.

No established “think tanks” in Taiwan are known to be supporting the leasing or selling of Taiping Island. INDSR, a new think tank established by Taiwan’s Ministry of Defense in March of this year, also has not said anything related to the alleged proposal.