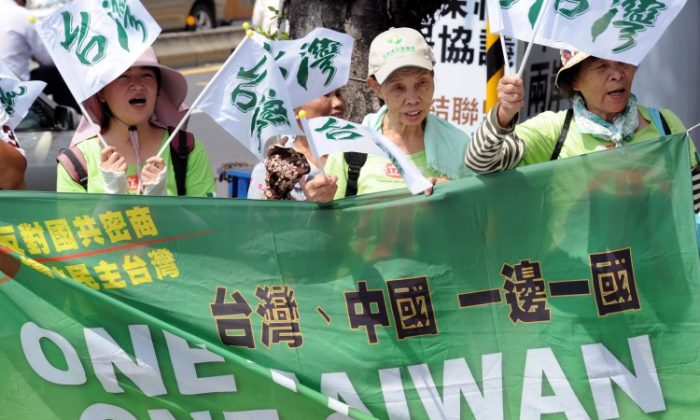 Anti-China demonstrators displays banners reading "one Taiwan, one China " in Taipei on August 8. Taiwanese have a poor impression of mainland Chinese people, the Chinese government, and its human rights record, according to a new survey. (Sam Yeh/AFP/Getty Images)
China

Taiwan’s legislature recently passed a resolution demanding that those who undergo organ transplants abroad to register with the Health Department. The resolution referred to the U.S. State Department’s 2011 Human Rights Report, which for the first time mentioned the issue of illicit organ harvesting in China, as well as numerous reports by international media on organ harvesting from Falun Gong practitioners and Uighurs.

Hsu Ming-neng, director of the Bureau of Medical Affairs under the Health Department, said the Health Department had already demanded hospitals to register the relevant information of organ transplant patients, and patients have organ transplants not only in China but also in the United States. The problem is to ensure the request is followed through, and to check prescriptions of anti-rejection drugs for compliance, said Hsu. Hsu also said the number of people traveling to China for organ transplants is declining, although there were still a substantial number of them in the past few years.

Legislative member Tien Chiu-chin, the sponsor of the resolution, said the resolution was passed after an inquisition by the Health & Environment Committee, and that many of those present were shocked to hear of organ harvesting for the first time. According to Budget Law, the resolution will have to pass a third reading during next year’s budget before the Legislative Yuan ends its session to become adopted as law. Patients will then be required to register organ transplants outside of Taiwan, or their health insurance will not cover their anti-rejection drugs.

Falun Gong human rights lawyer Theresa Chu said, for the safety of people both in Taiwan and China, Taiwan’s legislature is obliged to take a stand on the resolution. She called on lawmakers to openly condemn the Chinese regime for harvesting the organs of Falun Gong practitioners, as well as executed criminals and others. In addition, Chu hoped that the Health Department will follow through and register those who undergo organ transplants outside Taiwan, and also educate people not to travel to China for organ transplants to avoid taking part in crimes against humanity.