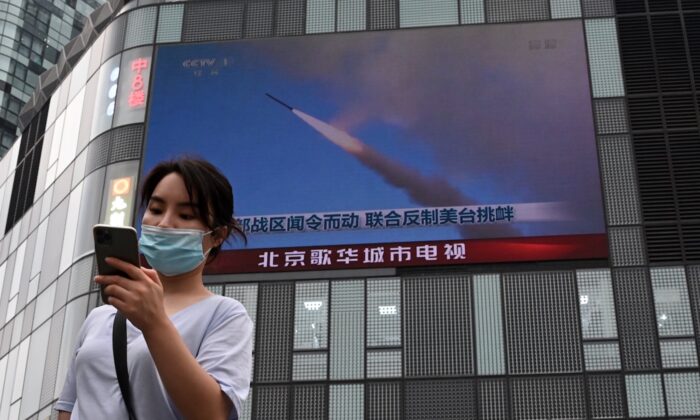 A woman uses her mobile phone as she walks in front of a large screen showing a news broadcast about China's military exercises encircling Taiwan, in Beijing on Aug.4, 2022. (Noel Celis/AFP via Getty Images)
Asia & Pacific

Cyberattacks crashed the website of Taiwan’s Defense Ministry and paralyzed its service not long after House Speaker Nancy Pelosi wrapped up her visit to the Chinese-claimed island on Wednesday.

The Military News Agency reported Thursday that the ministry’s website was taken offline by “denial-of-service attacks,” which disrupted the service with excessive traffic from 11.40 p.m. to 12.30 a.m. local time.

The ministry said that it was working with government agencies to strengthen surveillance of cyberattacks and safeguard its overall information security.

Several other government websites, including the Foreign Ministry, were targeted by cyberattacks ahead of Pelosi’s arrival on Tuesday. Local media reported that Chinese and Russian software was used in the attacks.

A spokesperson for Taiwan’s Presidential Office said the president’s website also crashed at 5 p.m. local time on Tuesday due to a 200-fold increase in traffic caused by “an outside-border DDoS attack.”

The digital signage systems of government facilities and convenience stores, including those of 7-Eleven stores, were also compromised.

The TRA immediately disabled the screens, which it claimed were handled by another company for advertising purposes, and increased its monitoring of the ticketing system.

Messages like “Warmonger Pelosi get out of Taiwan” appeared on the television screens of various 7-Eleven branches in Taiwan on Wednesday.

Chen Yaw-shyang, chairman of the National Communications Commission, said that some affected companies used Chinese software in their digital signage systems, which may contain malware that makes them susceptible to hacks.

The executive branch, led by Premier Su Tseng-chang, had previously urged the government to implement measures to counter the digital security risks posed by foreign cyberattacks and help industries cope with the impacts.

“The public and private sectors should work together and join hands to block inappropriate external interference, thereby ensuring society continues to function normally,” it said in a statement.

China’s ruling communists were irate at Pelosi for stopping at Taiwan during her Asia trip, which also included Singapore, Malaysia, South Korea, and Japan. The Chinese regime claims Taiwan as a part of its territory and opposes governments and international organizations interacting or forming ties with Taiwanese officials, as such actions suggest that the island is a de facto nation-state.

The regime in Beijing is so displeased with Pelosi’s Taiwan visit that China’s vice foreign minister, Xie Feng, summoned U.S. Ambassador to China Nicholas Burns late on Aug. 2. According to China’s state-run media outlets, Xie said the United States will “pay the price” for its “mistakes” of allowing her to visit the island.

The day before Pelosi’s arrival, China flew four J-16 fighter jets into Taiwan’s southwest air defense identification zone (ADIZ). The intrusion was stepped up the day of her arrival when 21 Chinese military planes flew into the zone.

China also announced that it would conduct live-fire military drills in six zones around Taiwan from Aug. 4 to Aug. 7. The announcement was issued minutes after the plane carrying Pelosi and her congressional delegation landed in Taipei on Aug. 2.