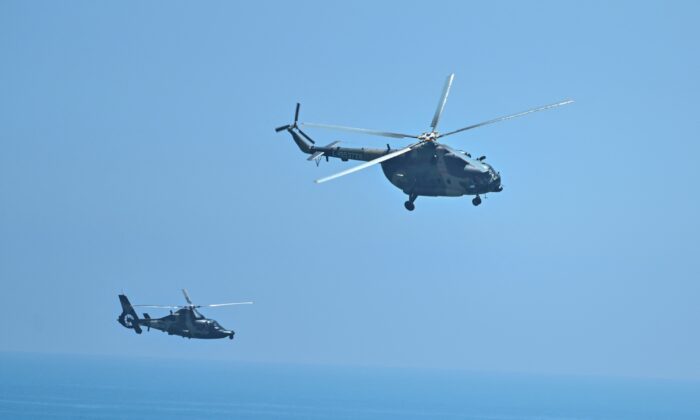 Chinese military helicopters fly past Pingtan island, one of mainland China's closest point from Taiwan, in Fujian province, ahead of military drills off Taiwan, on Aug. 4, 2022. (Hector Retamal/AFP via Getty Images)
Taiwan

Taiwan’s Taoyuan International Airport (TPE) canceled 51 international flights on Wednesday, a day before the Chinese Communist Party’s (CCP) military began live-fire drills in the waters on all sides of the island.

Taiwan News reported that 51 international flights due to arrive and depart TPE on Thursday were canceled, according to the airport’s official website. TPE’s website appeared to be down as of Thursday.

The canceled flights that were due to arrive in Taipei on Thursday include five Eva Air flights from Shanghai, San Francisco, Los Angeles, Osaka, and Fukuoka, as well as a China Airlines flight from Hong Kong.

The local outlet reported that TPE cited the COVID-19 pandemic and not the so-called live-fire drills as the reason for the flight cancellations, citing a statement published on the TPE website.

Pelosi’s visit has angered the CCP, which views the visit as affirming Taiwan’s de-facto independent status.

China’s foreign minister, Wang Yi, released a statement on Wednesday accusing Pelosi of making a “politically provocative” trip and accused the United States of undermining peace and regional stability in the Taiwan Strait.

The communist regime announced on Tuesday that the drills would be conducted in six separate exclusion zones on all sides of the island over four days from Thursday to Sunday, Aug. 7.

Aircraft and maritime vessels are “prohibited” from entering the six regions during that time, a move that may be designed to interfere with international shipping lanes.

According to reports, the CCP began its live-fire military drills on Thursday local time, including launching long-range rockets into the eastern part of the Taiwan Straits, CCP state media purported.

Taiwan’s Ministry of National Defense took to social media on Wednesday to clear up “rumors online” that the Chinese military had struck Taipei’s international airport with a missile.

“In response to rumors online, there is no missile attack from PLA against Taoyuan International Airport of R.O.C., and #TPE is working as usual. We strongly condemn this malicious act and urge netizens not to spread this disinformation,” the agency said on Twitter.

The CCP has never ruled Taiwan but claims the democratic island nation as a part of its territory under its so-called one China policy.

Beijing has previously threatened to use military force to bring Taiwan under CCP control.