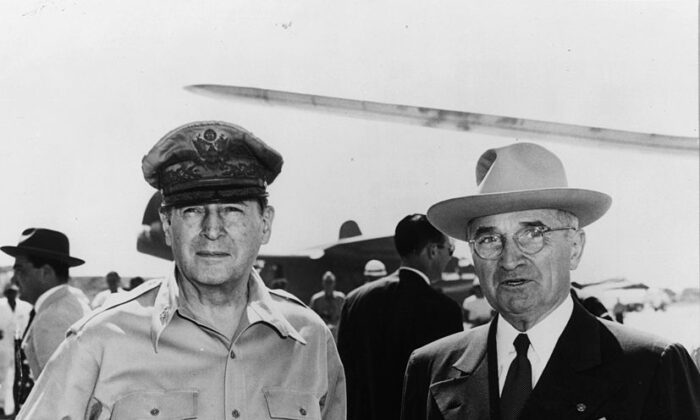 Taiwan at the Center of US Politics Once Again

The seeds planted by Dean Acheson in 1950 are bearing rotten fruit. Will the United States defend Taiwan?

“History doesn’t repeat itself, but it often rhymes” (frequently attributed to Mark Twain). Is that proverb a harbinger for Democrats in the run-up to the 2022 election? And could the Republic of China (Taiwan) once again be at the center of U.S. politics and be responsible for flipping the U.S. Congress from Democrat to Republican control? Let us examine the parallels.

In 1952, the Republican Party flipped both the U.S. House of Representatives and the U.S. Senate, gaining 22 seats in the House and 2 in the Senate. While ending the Korean War (but not the defense of Taiwan) was a big plank in candidate Dwight D. Eisenhower’s campaign, Republican control of Congress would not have been possible without the Republican gains made in the 1950 mid-term elections. In November 1950, the Republicans gained 28 seats in the House and 5 in the Senate, which positioned them for the eventual takeover of both houses in 1952.

While the then five-month long prosecution of the Korean War by President Harry Truman was a key issue in the 1950 mid-term elections, the Democrats had been reeling politically as a result of two self-inflicted wounds delivered by Secretary of State Dean Acheson: the release of the China White Paper and Acheson’s speech delineating a “U.S. defense perimeter” in the Western Pacific made to the National Press Club.

Taiwan was at the center of both of those events.

Since the end of World War II, the United States had supported the Nationalist government of China under General Chiang Kai-shek against the Communists led by Mao Zedong. By 1949, it became increasingly clear that the Communists would win the Chinese civil war for a variety of reasons, including Nationalist corruption, an inability to unite non-communist factions, and general mismanagement of the war. As a result, in June 1949, the Truman administration refused to extend the 1948 China Aid Act, dooming the Nationalist Kuomintang to certain defeat.

In order to minimize the political damage from the optics of “losing China to the Communists,” as well as to justify the failure of the United States to intervene militarily on behalf of the Chinese Nationalists, the Truman State Department made a calculated and fateful decision under the leadership of Acheson to disclose an unclassified history of U.S.-Chinese relations since 1843 in a 1,049-page document on Aug. 5, 1949 titled, “United States Relations With China: With Special Reference to the Period 1944–49,” dubbed the “China White Paper.”

The document contained this important paragraph, which summed up the State Department’s reason for the impending victory by Mao Zedong’s People’s Liberation Army (PLA):

“The unfortunate but inescapable fact is that the ominous result of the civil war in China was beyond the control of the government of the United States. Nothing that this country did or could have done, within the reasonable limits of its capabilities, could have changed that result; nothing that was left undone by this country has contributed to it. It was the product of internal Chinese forces, forces which this country tried to influence but could not ….”

The reception by the U.S. press, and particularly by the very active China Lobby at the time, was the opposite of what Truman and Acheson had hoped. Critics claimed that the United States had not done all it should have done to defeat the Chinese Communists, and an unintended result was that Mao himself was able to earn a propaganda victory by helping turn Chinese sentiment against the United States in a series of public articles that railed against “American imperialism.” And the China Lobby in the United States increased its public criticism of Truman’s China policy via the U.S. media, which in those days—unlike today—was highly critical of communist aggression everywhere.

Furthermore, Acheson’s cover letter to the document proved particularly disastrous. By conveying some personal wishful thinking that “Chinese democratic individualism” would eventually allow the Chinese people to peacefully sort themselves out and rejoin the world’s nations, he exposed Chinese intellectuals and others who were neither Nationalist nor Communist at the time to harsh scrutiny by the Chinese Communist Party (CCP), and forced democratic-minded people who had joined the CCP to redeclare their loyalty to Mao and the authoritarian CCP in order to avoid persecution/execution.

The overall political fallout of the China White Paper was disastrous for the Democratic Party and was a major contributor to their loss of congressional seats in the 1950 elections.

On Jan. 12, 1950, Acheson gave an important speech that outlined U.S. policy vis-à-vis East Asia and the Western Pacific. In that speech, Acheson defined a U.S. defense perimeter that “runs along the Aleutians to Japan and then goes to the Ryukyus … to the Philippine Islands.” That demarcation did not include South Korea, and many critics have judged that omission to have been the spark that ignited the North Korean invasion of South Korea in 1950.

Lost in the focus on the Korean War and often overlooked in the speech is that Acheson’s defensive perimeter also failed to include Taiwan. In fact, this failure set the tone for U.S.-China policy through the present, as documented in the Three Communiques previously discussed here in which the United States ultimately formally recognized the People’s Republic of China (PRC) and agreed that Taiwan was “part of China.” The meaning inferred by the China Lobby and the rest of the world by Acheson’s exclusion of Taiwan from the U.S. defense perimeter was clear: The United States would not defend Taiwan against PLA attack.

Acheson’s speech also left Tibet outside the U.S. defense perimeter, leaving the door open for the PLA to march in—and march in it did! With the defeat of Kuomintang forces completed by the end of 1949, the PLA began consolidation of disputed territories in the Chinese interior, including Tibet. The PRC demanded that the Tibetan government in Lhasa agree to a three-point claimed proposal that Tibet would henceforth be regarded as part of China. The PRC would be “responsible for Tibet’s defense”—meaning, there would be no need for a Tibetan army. The PRC would also be responsible for Tibet’s trade and foreign relations—in short, the end of a free Tibet.

Tibetan refusal of these conditions would result in conquest by the PRC. The PRC was not to be denied, and in June 1950, the PLA and the Tibetan army fought for the first time at Dengke (100 miles northeast of the Chamdo region in eastern Tibet). On Oct. 7, 1950, the PLA invaded and conquered Lhasa-controlled Chamdo—after which PRC intimidation and repression was ratcheted up to the present day to include persecution and genocide of the Tibetans who were unable to flee to Nepal, India, and elsewhere.

The China Lobby in the United States, the Tibetans, and other democratic-minded people naturally considered Acheson’s speech yet another abandonment by the Democratic Party, which helped to defeat Democrats in the 1950 mid-term elections.

Could U.S. political history repeat itself in 2022 with the flip of Congress from Democrat to Republican control? While there are abundant domestic reasons for this happening, including the disastrous open southern U.S. border, accelerating inflation, and growing resistance to Democrat-directed lockdowns and unconstitutional vaccine mandates, the fate of Taiwan could very well feature prominently in the minds of American voters in November 2022.

The PLA Air Force (PLAAF) and CCP diplomats are regularly intimidating Taiwan, especially after the U.S. abandonment of Afghanistan. Chinese state-run media are adamant that there is “no room for concessions over [the] Taiwan question,” which means that Taiwan will be “incorporated” into the PRC in due course according to a CCP timetable. The Chinese may have successfully conducted two tests of nuclear-capable suborbital-launched hypersonic glide vehicles that could be used as first-strike strategic weapons. And China-India talks “over the standoff in Eastern Ladakh” have collapsed due to PLA intransigence. All of these aggressive activities point to increasing CCP belligerence.

Meanwhile, here is the tepid response by White House press secretary Jen Psaki to those Chinese hypersonic missile tests, which is similar to recent word-play by State Department apparatchiks about all the rest of the aforementioned CCP actions, including the intimidation of Taiwan: “We welcome the competition.”

Is it any wonder that 12 House Democrats have already announced their retirement from Congress in 2022? Will others announce their retirements before the mid-terms, too? Methinks that they see a 1952-style train wreck headed their way next year—and at least partly thanks to the Republic of China, again!