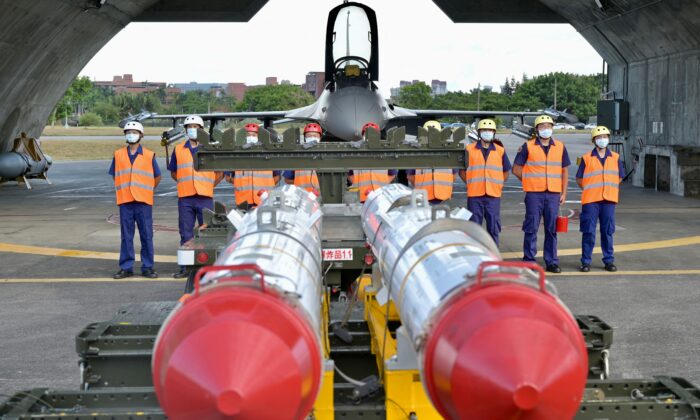 Taiwan is conducting military exercises in response to ongoing aggression by Chinese communist forces over the past two weeks.

Chinese Communist Party (CCP) forces have continuously launched missiles over Taiwan and directed sea and aircraft into the sky and waters around the island since U.S. House Speaker Nancy Pelosi (D-Calif.) visited the island on Aug. 2.

Pelosi said that the trip demonstrated the CCP couldn’t isolate Taiwan from the rest of the world. China, meanwhile, has accused the United States of provocations.

Taiwan hopes that its drills, which began on Aug. 17, will enhance combat preparedness amid fears that the CCP is preparing for an invasion of the island.

“Communist China’s military operations just provide us with the opportunity for combat-readiness training.”

A spokesperson for Taiwan’s foreign ministry added that the communist regime uses Pelosi’s trip as a pretext for military escalation, describing the regime’s ongoing aggression as “barbaric.”

The CCP claims that Taiwan is a rogue province that must be united with the mainland by any means necessary. It has explicitly refused to renounce the use of force to accomplish this goal and has threatened to take forceful action against so-called separatists, a term it has used to refer to Taiwan’s president and its majority party.

However, Taiwan has been self-governed since 1949 and has never been controlled by the CCP. The island boasts a democratic government and a thriving market economy.

CCP forces have conducted several sets of military exercises around Taiwan since Pelosi’s visit two weeks ago, the most recent of which began on Aug. 15, as Chinese forces continuously cross the median line of the Taiwan Strait and into Taiwan’s air defense identification zone.

Communist authorities have further vowed to normalize such behavior in an apparent effort to rewrite the status quo.

Taiwan has responded to these incidents by deploying its own aircraft, naval vessels, and land-based missile systems.

In addition to escalating military exercises, China also has directed cyberattacks against Taiwanese infrastructure, implemented import bans on goods from Taiwan, and imposed visa bans and other sanctions on Taiwanese political figures.

Because the CCP has never controlled Taiwan and has no effective legal authority over the island, it’s unclear what effect the sanctions could have.

CCP authorities cut official communications with Taiwan in 2016, following the election of President Tsai Ing-wen, who was overwhelmingly reelected in 2020.

Most Taiwanese people favor maintaining the status quo, with the island exercising de facto independence while maintaining some economic and cultural ties with the mainland.