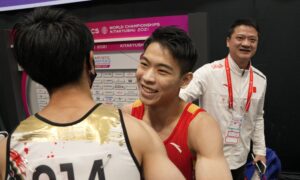 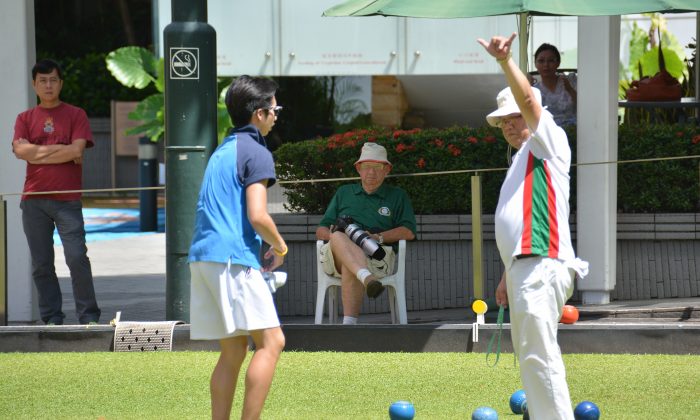 Six! ... Tai Po’s Chan Wah indicates to his skip that they have won six shots at the critical 8th end. The win allowed TPLBC to move in front of their opponent from Indian Recreation Club and set the tune for their victory in the National Triples. (Stephanie Worth)
International

It was again another heartbreaking moment for the young trio of Howard Poon, Jonathan Law and Desmond Hau last Sunday, Aug 4, when they lost the National Triples Final for the second consecutive year. Their downfall also paved the way for Taipo Lawn Bowls Club (TPLBC) to win their first-ever National competition since forming in 2000.

The game, which originally started at the Finals Day on July 7, was disrupted by heavy rainstorm and rearranged to last Sunday. The young trio, a product of the Hong Kong Youth Team, represented Indian Recreation Club (IRC) at the tournament. They played Chan Wah, Theodore Li and Edward Cheng from TPLBC.

Incidentally, Li was also a Youth Team member, but had to quit the team after two years due to time commitments.

As all the six players have never had any success in national competitions before, the match was tense right from the beginning. IRC was leading 4:3 when the game was stopped at the fifth end a month ago.

On the resumption, the young guns won the first two ends in quick succession before disaster struck on the eighth end.

Both sides displayed highly skilful drawing with the majority of the bowls resting within a circle of 50cm in diameter. TPLBC skipper Cheng had moved the jack by 10cm with his last bowl to win a six.

Hau, the IRC skipper, did not think that the result of this end affected them much.

“It was the following end that hit us most,” recounted Hau.

In that end IRC was winning four shots before the TPLBC skipper played his last bowl to steal the end. The delivery was a bit narrow, but his bowl was deflected by a bowl in front to reach the end and win a shot.

The TPLBC team held a four shot lead into the last end.

After the first four players finished bowling, the IRC team was winning the end by three shots. Hau needed to draw another shot, and hoping the opposing skip did not do anything to change the shot bowls, to tie the scores and force the game into an extra end.

Cheng did not have any impact with his three shots, but Hau also missed his two. The open draw presented a great chance for Hau, but his shot stopped 30cm from the winning position.

Hau, speaking after the contest, expressed his disappointment of his performance during the game

“Technically both sides are pretty much equivalent, but some of my execution is not up to my usual standard today,” lamented Hau.

“Maybe it was the tension that got to me.

“When looking back it seems that some of my judgment may not be 100 per cent correct. This is an area me and my team-mates need to work on.

“We will come back stronger next year,” said Hau.

Meanwhile, skipper Cheng is happy that he won the first national trophy for TPLBC.

“Today we played very calmly, largely because we believe it has been a great achievement to reach this stage.

“Of course winning it is even better,” said Cheng.

He thinks that both teams played very well, but the opponent was a bit nervous and this may have affect their performance.

“The most obvious example is Hau’s last bowl. It was a 2-metre shot and in a normal situation he should be able to draw to it. He was 30cm short and it is this difference that handed us the trophy.”