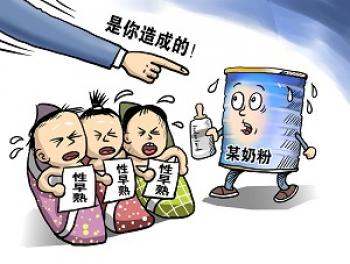 Qian Qi
View profile
Follow
biggersmaller
Print
China’s domestic media was early last month awash with high-profile reports about the signs of premature sexual development in infant girls, linked to Synutra International’s milk powder formula. The reporting seemed to come to an abrupt halt, however, when China’s Ministry of Health announced on Aug. 15 that the milk powder was not the cause of the peculiar symptoms.

According to a Radio Free Asia report on Aug. 25, the Communist Party’s Propaganda Department banned all media from associating Synutra’s formula product line with premature development in infant girls.

Controversy has been revived by the recent cancellation of an interview with three parents of affected children, among the first to bring the issue to light. The parents maintain that the authorities muzzled the news.

Phoenix TV called the three parents in Wuhan to cancel their scheduled interview in Beijing. Ms. Deng, one of the parents, expressed her view that the media was pressured by communist authorities to cancel the interview.

“When we were about to get on the train to depart for Beijing around noon, the person in charge called us, saying that a higher authority ordered them to cancel the show. He told me that we did not have to come,” said Deng.

Deng has been in contact with over 30 parents who suspect that their children are victims of Synutra’s milk formula. She has turned over milk powder from the batch that her daughter ingested to an overseas reporter for independent testing. To date, she has not received test results.

Mr. Gao, the father of the seven-month-old baby girl, told The Epoch Times that his daughter has been drinking a Synutra formula product since birth. When she was six months old, she began to have white discharge and bleeding from her lower body. The doctor told him that his daughter could have an infection. A month later, the bleeding appeared once again. The hospital ran tests on the infant’s hormone levels and her pituitary gland, but did not offer any conclusions.

Gao expressed skepticism over the testing. “If the issue of the milk powder had not surfaced, doctors would probably have suggested that the powder was the problem. Initially, a doctor did suggest that we switch milk formulas. Now no one dares to say anything.

“There is nothing I can do about the reporting. Media are the government’s mouthpieces. They don’t dare to report.”

He telephone a number of Chinese media agencies on Aug. 17 and 18, in hopes that they would report on the matter, though none did. On Aug. 24 an evening news program had picked up his story, and Gao discovered that within two days dozens of websites had copied the news. Gao’s excitement was short lived, because on the same day all but one of the reports were no longer available, presumably deleted by censors.

Gao intends to collect milk powder samples from several other victimized families, and plans to send the samples to Hong Kong for independent testing.

Since the Health Department publicly declared that Synutra’s milk formula products were not related to premature sexual development in infant girls, the supermarkets have put the company’s products back on the shelves.

Beijing Human rights attorney Xu Zhiyong is currently gathering evidence against Synutra International, and plans to sue the company on behalf of his clients.