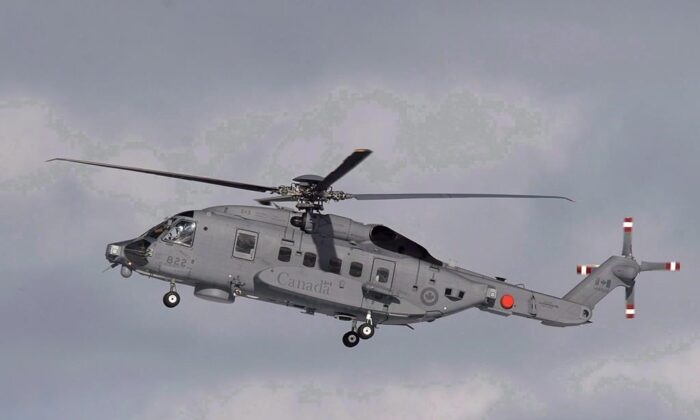 A CH-148 Cyclone maritime helicopter is seen during a training exercise at 12 Wing Shearwater near Dartmouth, N.S. on March 4, 2015. (The Canadian Press/Andrew Vaughan)
Canada

Tail Cracks on Military’s New Helicopters Likely Due to Weight of Equipment: DND

OTTAWA—The Department of National Defence is blaming an apparent design flaw for the cracks recently discovered in the tails of most of the military’s new Cyclone helicopters.

In a statement Monday, the department said it was believed the weight and pressure of equipment installed on the tail are likely responsible for the cracks, which have been found on 21 of the military’s 23 Cyclones. Nearly half of them remain grounded.

That conclusion was based on an “initial determination” from U.S. manufacturer Sikorsky Aircraft, which has been working with the military to identify the cause and find both a short-term fix and a long-term solution to the problem.

It wasn’t immediately clear who is to blame for the problem. The department said it was due to “structural loads” caused by the helicopters’ electronic warfare suite and satellite communications antenna while in flight.

The Defence Department referred questions about the cause of the cracks to Sikorsky, and said that it did not expect to bear any added costs from having to fix the problem.

It also acknowledged the problem was not discovered during the department and military certification process before the aircraft was allowed to start flying.

The department suggested it is not uncommon for issues to arise on new military aircraft and other equipment shortly after they enter service, including those that have gone through similar certification.

The tail cracks are nonetheless the latest in a growing list of problems for the Cyclones since 2017. Those include several power failures and a software problem that caused one to crash off the coast of Greece in April 2020, killing six Armed Forces members.

The military had said it is working with Sikorsky on a fix to the software issue, though it remains uncertain nearly two years after the crash when the problem will be addressed.

Sikorsky did not immediately respond to questions on Monday about the cause of the cracks, though spokesman John Dorrian did say in an email that they did not pose an “immediate” safety hazard.

“We expect to have a definitive solution by the end of February,” he added.

In the meantime, the Defence Department said it has so far patched the cracks on 11 of the 21 affected helicopters, while work is underway on four more. It is not clear when the entire fleet will return to service.

Larry McWha, former commander of 423 Maritime Helicopter Squadron at 12 Wing Shearwater in Nova Scotia, said the Defence Department’s statement clearly reveals the problem is “a design issue that has to be fixed.”

The statement doesn’t answer whether Sikorsky was deficient in designing the Cyclone, which is based on the company’s S-92 helicopter, or whether there was a gap in the Defence Department’s certification process that should have caught it earlier.

“Hopefully Sikorsky will come up with a solution that will prevent it from being a recurring problem,” he added. “Because obviously this happened fairly early in the life of the aircraft, to almost all the fleet.”

The Cyclones are typically deployed on Canadian frigates and used for search and rescue, surveillance and anti-submarine warfare. They first started flying real missions in 2018 after nearly two decades of developmental problems and delays.

Sikorsky has yet to deliver all 28 helicopters ordered by Canada, at a total cost of $3.1 billion, and still needs to upgrade the software on those it has delivered to meet the military’s requirements.

The Defence Department said it has been able to keep enough Cyclones in the air to meet Canada’s needs, which includes deploying them on three different warships operating overseas this month.

Assistant deputy minister of materiel Troy Crosby also said he would feel safe flying on the military’s new Cyclone helicopters, and that he was more concerned about an “urban myth” emerging about the aircraft than its actual airworthiness.