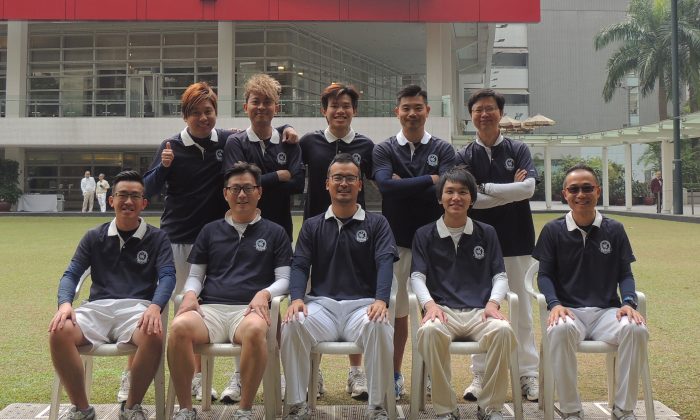 Champion and savior – The CCC-B team celebrates their championship at the Triples League Division 1 before replacing their A team in the final game of the season and save them from relegation last Saturday, February 27, 2016. (CCC)
HK Lawn Bowls

Tactical Changes Save CCC From Relegation

HONG KONG—After winning the Triples League Division 1 title with a game to spare, all members of the champion team at Craigengower Cricket Club switched to the other team in the same division that was deep in relegation trouble in the final game of the season last weekend and helped them to survive.

The CCC-B was crowned champion the week before but the CCC-A was still engaged in a relegation dogfight against Club de Recreio. Into the last round CCC-A was trailing CdeR by eight points but with a superior shots difference. So CCC-A needed an 8-0 win to maintain their top flight status, which also means that CdeR would be relegated.

In a tactical rearrangement of the team members, all the nine players who originally played for CCC-B was switched to CCC-A. Such arrangement was not against the HKLBA rules as team B was considered a lower ranking team, despite the fact that they were in the same division and with a better results, so their players can move up to a higher ranking team.

The CdeR team was surprised to see their opponents were the same players who defeated them 8-0 earlier in the season.

History repeated itself and the same result was registered at the end of the game. CdeR were level on points with CCC-A but the inferior shots difference pushed them to Division 2, along with bottom club Lawn Bowls Training Center.

On the loser side, Hong Kong Football Club has two teams narrowly missed out on promotion but it was not as worse as Greende Lawn Bowls Club and Golden Bauhinia Lawn Bowls Club as all their teams were relegated.

Now the attention will be on the final game for the women. HKFC will need to win their game 8-0 and hope the leader lost points in the final game to maintain their hope of a fifth consecutive title.

Currently Shatin Sport Association is leading the table with a two points lead and they will play third-placed Kowloon Cricket Club away from home. The defending champion will play fourth-placed Island Lawn Bowls Club at home.

At the bottom United Service Recreation Club was doomed and the five clubs above them still have the possibility of getting relegated so anything could be happened after the last match of the season. All games will be played at 3:00 this weekend.

On Sunday this week (March 6) the Champion of Champion Finals will take place with preliminary rounds at CdeR (men) and at the Filipino Club (FC) for the women’s event. Both finals will be at FC with an expected start time of 3:45pm.