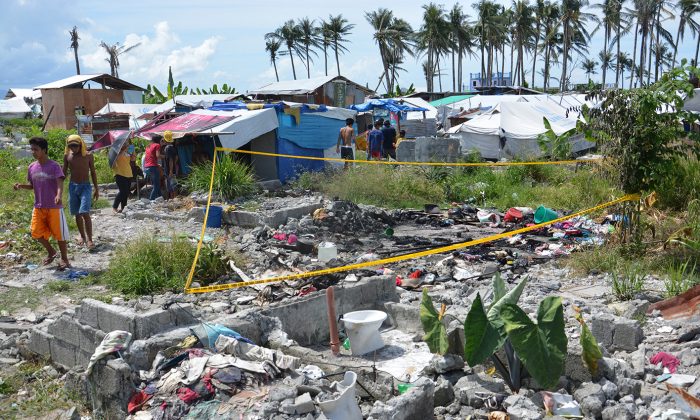 In this photo released by the City Mayor's Office of Tacloban City, a yellow tape is placed around the burnt remains of a tent that was razed by a fire early Wednesday, May 28, 2014 at a tent city in Tacloban, Leyte province in central Philippines. An overnight fire razed a tent used as a temporary shelter by the survivors, killing a woman and five of her children, including a 4-month-old girl, officials in a central Philippine city devastated by the massive storm said Wednesday. The tragedy highlights the slow progress in the resettlement of tens of thousands of survivors of Haiyan, one of the world's strongest typhoons to make landfall November 8, 2013. The tents were donated by U.N. relief agencies after Typhoon Haiyan devastated Tacloban city and other provinces in central Philippines.(AP Photo/Tacloban City Mayor's Office)
Asia & Pacific

Tacloban City residents living in tents were forced to return back to evacuation centers on Tuesday to escape Typhoon Glenda (Rammasun).

About 1,000 survivors of Typhoon Yolanda were sent back to the centers, according to Rappler. Meanwhile, about 2,169 people were evacuated around the area, according to The Inquirer.

Gerard Paragas with the City’s Disaster Risk Reduction Management Council told the paper: “We are giving priority to families living in tents in our evacuation efforts,” Paragas said.

The Tacloban City government gave meals to those who were evacuated.

“There’s clearly an urgency to make sure that all people are able to get into appropriate shelters that would allow them to live with their families in a dignified way, but also to carry out their livelihoods,” Oxfam country director Justin Morgan was quoted by Rappler as saying.

Estimates taken in April said that about 130,000 survivors of Typhoon Yolanda still live in tents. More than 6,000 people were killed in the storm last year.

MANILA, Philippines (AP) — A tropical storm strengthened into a typhoon Tuesday as it hurtled toward the northeastern Philippines, prompting disaster-response authorities to evacuate thousands of people from villages prone to floods and landslides.

Typhoon Rammasun, packing winds of 120 kilometers (75 miles) per hour and gusts of up to 150 kph (93 mph), was expected to smash into land later Tuesday in Albay or Sorsogon provinces, where thousands of residents have moved from their villages to emergency shelters.

Schools suspended classes in several cities, including in the capital, Manila, in the typhoon’s expected path and about 50 domestic flights and four international flights have been cancelled due to bad weather.

Albay, about 340 kilometers (212 miles) southeast of Manila, is a disaster-prone province where mudslides from Mayon, the country’s most active volcano, buried villages in 2006 and left about 1,600 people dead and missing.

By Tuesday morning the typhoon was 180 kilometers (112 miles) east of Albay’s coastal Legazpi city, government weather forecaster Rene Paciente said, adding it may blow across or near the densely populated capital Wednesday morning.

Alexander Pama, executive director of the National Disaster Risk Reduction and Management Council, said rescue teams have been positioned near disaster-prone regions, along with packs of food and medicine, army trucks and ambulance vans.