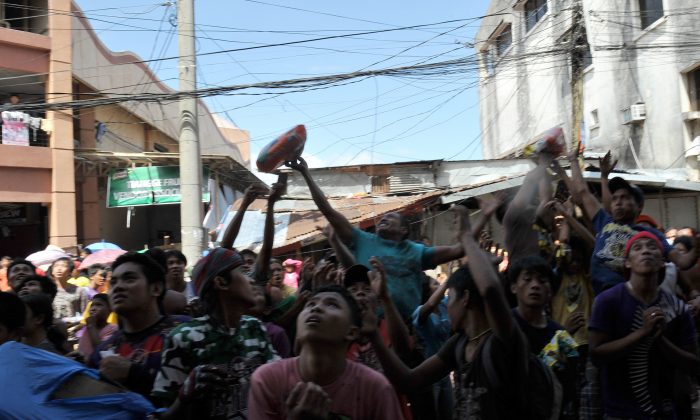 Tacloban City: Curfew, State of Emergency in Place in Philippines City Amid Looting

Tacloban City in Leyte was placed under  a state of emergency and a curfew was implemented following looting and other anarchistic behavior in the wake of Typhoon Yolanda, or Haiyan, according to reports.

The city was leveled by the storm’s powerful winds and storm surge that was 20 feet high, killing potentially thousands. As a result of the devastation, people began to loot stores, gas stations, and other businesses for food, water, and other necessities.

GMA News reported that a curfew from 10 p.m. to 6 a.m. was implemented to prevent more looting. The Philippine National Police and Armed Forces of the Philippines have sent more troops to secure the city.

“Please tell my family I’m alive,” Erika Mae Karakot, a survivor on Leyte island, told The Associated Press. “We need water and medicine because a lot of the people we are with are wounded. Some are suffering from diarrhea and dehydration due to shortage of food and water.”

The United States also announced that it would be sending in military help.

“Tacloban is totally destroyed. Some people are losing their minds from hunger or from losing their families,” high school teacher Andrew Pomeda, 36, told AFP. “People are becoming violent. They are looting business establishments, the malls, just to find food, rice and milk…. I am afraid that in one week, people will be killing from hunger.”

“There is looting in the malls and large supermarkets. They are taking everything, even appliances like TV sets. These will be traded later on for food,” he said, according to CBS.

And Tacloban officials can’t do anything about it, he added.

“We don’t have enough manpower. We have 2,000 employees but only about 100 are reporting for work. Everyone is attending to their families,” he said.

Elaborating on the gravity of the situation, there were gunshots fired outside of a jail in Tacloban after prisoners tried to escape, reported Rappler.

Tacloban City Mayor Alfred Romualdez said, however, that residents of the city have started to “calm down.”

“Considering that most people survived the strongest ever recorded typhoon/hurricane/cyclone in the world, how can they be prepared for that?” he told Interaksyon.

Philippine National Police General Alan Purisima said it is not needed to declare martial law in the city.

“There’s no need to declare martial law. What they need is food and we should provide what they need. The government is pouring it all in the area,” Purisima said. “We will not support calls for martial law. We have already flooded those areas with our personnel to restore law and order,” he added.

Local residents, he added, should clear debris from the road to hasten the delivery of supplies.