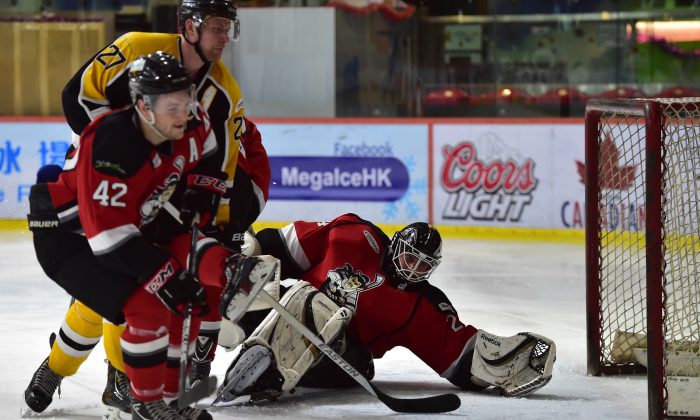 Brad Smith (Hong Kong Tycoons) on the attack against the Kowloon Warriors in their CIHL match at Mega Ice, on Saturday Dec 6. Smith slotted in three goals in the first 7-minutes of the game, but that was still not enough to win the match as the Warriors hit back and eventually won the match 7-6. (Bill Cox/Epoch Times)
HK Ice Hockey

Warriors vs Tycoons
A flurry of goals in the first period set this game alight. Brad Smith, one of the two goal specialists of the Hong Kong Tycoons secured a hat-trick of goals in the first 7 minutes of the game. However, Kowloon Warriors hit back with four goals of their own through Eric McKenna, Leo Kan, Greg Smyth and Jake McDonnell to make it 4-3 to Warriors after the first Period.

After two goals each in Session-2, first by the Tycoons via Dennis Lo and Kory Falite and then for Warriors by Eric McKenna and Greg Smyth, the score was 6-5 to Warriors at the Ice Cleaning Break.

All to play for in Period-3, Leo Kan opened up a two goal gap for the Warriors in the second minute of the period and it was not until almost the end of the match that Don Ho pulled one back for the Tycoons. Warriors then held on for a vital win to move them within 3 points of the leader.

Sharks vs Aces
South China Sharks notched up a 5-3 win over the Macau Aces to move them onto level points with their opponents of the night and both are 2-points behind the leaders (Tycoons) at the mid-point of this 16-round series.

Three goals by Jordan So for Sharks during the first 2 sessions of play against one strike by Whitney Olsen for the Aces gave sharks the advantage going into the Ice Break.

Sharks then opened the gap further with a goal by Ronald Mathez bringing the score to 4-1. Christopher Antonelli and Bently Tse pulled two goals back for Aces, but in the meantime Jamie Stark added for Sharks giving them a firm 5-3 win.

The unluckiest guy of the night was Aces, Michael Mackie-Kwist who got penalised three times in Period-3 for Slashing, Holding and High Stick – 6-minutes off the ice.

Standings
Hong Kong Tycoons are on 10-points, South China Sharks and Macau Aces have 8-points, and Kowloon Warriors are on 7-points.