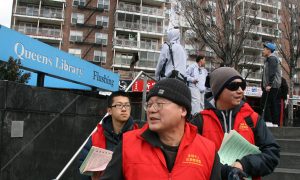 NEW YORK—A small table set up on Main Street, Flushing, is the nexus of a complicated set of ties between the Chinese Communist Party, city Comptroller John Liu, and a hate campaign against a spiritual group.

The woman behind the table most days, Li Huahong, has been arrested multiple times for assault in Flushing. Li is currently the target of a lawsuit for allegedly beating a passerby who tried to assist a Falun Gong practitioner who was being attacked by Li.

Although not many people stop, she sets up the table to disseminate hate propaganda attacking Falun Gong (also known as Falun Dafa) in the style used by the Chinese regime since it launched a persecution campaign in 1999.

The materials she distributes in Flushing have included a series of obviously false yet provocative claims, including that a Falun Gong practitioner killed someone outside the Flushing library in 2009. In an earlier interview, a cohort of Li’s, Shen Rong, said the murder claim was “obviously an exaggeration.” There were, in fact, no reports of such an incident.

Bryan Edelman, senior trial consultant at the Jury Research Institute in San Francisco, and who has written articles in peer-reviewed journals about Falun Gong, does not think it’s a stretch that a front organization set up to defame Falun Gong may be behind the table in Flushing.

“I think it is reasonable to assume that any organized attempt to put pressure on the Falun Gong within the U.S. can be traced back to China,” he wrote in response to a previous inquiry on the topic.

“Chinese support of these groups gives some insight into the level of paranoia within the CCP and the magnitude of its efforts to eliminate the Falun Gong both domestically and internationally,” Edelman wrote.

Taking to the Streets

Li Huahong was also one of the main protagonists in an eight-weeklong attack on Falun Gong practitioners in the streets of Flushing in 2008 while John Liu was a city council member for the district.

The Chinese consul general at the time, Peng Keyu, was later caught in a telephone conversation admitting to instigating the attacks. Li’s propaganda table carried anti-Falun Gong propaganda next to pro-John Liu messages, and still does.

When asked whether John Liu supported the opening of the anti-Falun Gong propaganda booth, Shen Rong said, “Yes, yes, yes” and that “He [Liu] supports our righteous actions,” in a previous telephone interview.

Li was rewarded this year for her actions in a little-known ceremony that brings the communist party to the doorstep of Flushing.

During the Chinese Lunar New Year an official introduced at the award ceremony as Zhu Yibiao, a key official from China’s powerful security apparatus, the Political and Legislative Affairs Committee (PLAC), gave Li an Award for Daring to Struggle.

When asked about the award in a telephone interview, Li became agitated and asked, “How do you dare ask that question?”

Hou Jianli is the president of the New York Beijing Association—well known for its connections to the mainland and the Chinese Consulate in New York.

Hou also arranged a trip to China with John Liu in 2007.

“It is very obvious that what happens in Flushing is part of the Communist Party’s plan, led by top communist officials from Beijing and Zhou Yongkang himself,” Wenyi Wang said.

Zhou Yongkang is the head of the PLAC in China, which is well known for its top-down zealousness in torturing, brainwashing, and killing Falun Gong practitioners. Zhou is currently reported to be in a politically tenuous position for his collaboration with ousted official Bo Xilai and for his reported insubordination to the Hu Jintao leadership.

Zhou Yongkang has been sued outside of China for crimes against humanity. Zhou’s acts helped him gain critical positions within the Communist Party under support from the persecution’s initiator, former leader Jiang Zemin. The PLAC oversees all legal systems and is first and foremost in charge of suppressing enemies of the Communist Party.

Li and her associates frequently physically and verbally attack Falun Gong practitioners, and encourage other Chinese immigrants to join them by promising financial benefits.

Two years ago, a woman whose two sons were serving in Iraq was one of the victims.

“You can imagine how her boys felt upon returning from the battlefield to find their mother being threatened and roughed up by Chinese Communist Party thugs here in New York,” said Levi Browde, Falun Dafa Information Center spokesperson. “Let’s be clear: this table is a representative of a foreign communist power looking to persecute people here in America.”

“You can see that it is the Communist Party’s culture to promote violence, and they want to export this culture to America,” said Wenyi Wang. “We will continue to seek justice against Li Huahong and this organization because it spreads violence and hate.”

Falun Gong was introduced to the public in China in 1992, and by the late 1990s was the nation’s most popular qigong practice, with over 100 million practitioners. Many top officials and their families were practicing it.

Since Jiang Zemin launched the persecution in 1999, more than 3,500 practitioners have been killed in China, according to the Falun Dafa Information Center. The actual number is thought to be many times higher.