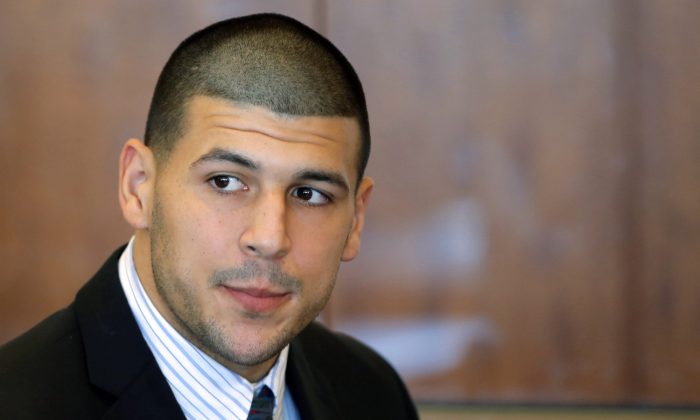 In this Oct. 9, 2013 file photo, former New England Patriots NFL football player Aaron Hernandez attends a pretrial court hearing in superior court in Fall River, Mass. Tabitha Perry, who has ties to Hernandez, died on December 16, about a half a year after she survived a car crash that killed Thaddeus Singleton III, who also had ties to Hernandez. (AP Photo/Brian Snyder, Pool, File)
US

Perry’s death is being investigated but is not considered suspicious.

Officials found Perry at a home in Southington, where she was visiting a friend, unconscious and not breathing.

Police told the Hartford Courant that the state medical examiner’s office is waiting for results of toxicology testing before ruling on a cause of death.

Perry was previously injured in a car accident on June 30 that killed Thaddeus Singleton III, the driver. Singleton had a child with Perry but was married to Tanya Singleton, a cousin of Hernandez.

Hernandez is in jail awaiting trial for murdering two men in a drive-by shooting.

Tanya Singleton faces an accessory charge in the case.