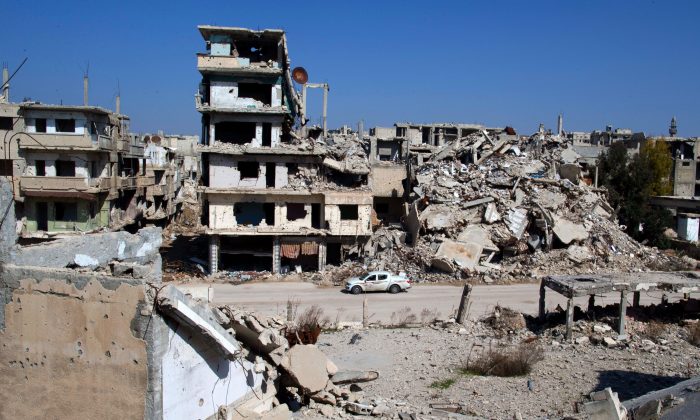 A car drives through a devastated part of the old city of Homs, Syria, on Feb. 26, 2016. Some 1,200 rebels and civilians, many of them wounded and starving from a yearlong siege, withdrew from the last remaining strongholds in the ancient heart of Homs in May 2014, surrendering to President Bashar Assad a bloodstained city once dubbed the “capital of the revolution.” (AP Photo/Hassan Ammar)
Middle East

HOMS, Syria—Two years after the last Syrian rebels left the besieged Old City of Homs, voices echo through the shells of bombed-out buildings, their upper floors tilted at odd angles as though frozen in time.

“There is no danger here, because there isn’t anybody,” a soldier said as gunfire rang out in the distance. “No gunmen, not a soul, not even animals, nothing. Only concrete.” He spoke on condition of anonymity in line with regulations.

Some 1,200 rebels and civilians, many of them wounded and starving from a yearlong siege, withdrew from the last remaining strongholds in the ancient heart of Homs in May 2014, surrendering to President Bashar Assad a bloodstained city once dubbed the “capital of the revolution.”

The return of nearly all of Syria’s third largest city to government control dealt a painful blow to the uprising, which began with mostly peaceful protests in March 2011 before a harsh government crackdown and an ensuing insurgency plunged the country into civil war.

At one point, rebels controlled nearly 70 percent of Homs, which had a prewar population of 1.2 million. But a government counteroffensive and heavy fighting pulverized much of the city, and the siege eventually starved the opposition out.

The return of Homs allowed government forces to solidify their presence in central Syria, linking the capital, Damascus, to strongholds on the Mediterranean coast. It soon became a staging ground for advances farther north.

For days after the siege ended, many families returned to check on their homes, gazing bewildered at the sprawling ruins and taking pictures of the destruction. Few elected to stay.

Soldiers still patrol the streets, some of which have green grass sprouting up through the rubble while others are still coated in chalk-white ash. Many are lined with the carcasses of burnt-out cars. Entire neighborhoods are without shops, electricity or running water.

Kerry Says He Won’t Vouch for Success of Syria Ceasefire

A monumental reconstruction effort would be needed to rebuild the city, but it’s unlikely to begin before the end of the war. A recent cease-fire has brought respite to much of Syria, but no one expects the conflict to end anytime soon.

In the meantime, some streets in Homs are slowly coming back to life. In one street in the Baba Amr neighborhood, women could be seen walking children as boys played soccer in the street. Up above, a boy used a broom to sweep the third-floor balcony of a recently rebuilt apartment building.

But 300 meters (yards) away, a toppled electricity pole blocked the road. The rest of the neighborhood has not yet been cleared of mines.

Buothayna Hawlani recently returned to Baba Amr with her husband and six children. Their house had been ransacked and burned, the walls were riddled with bullet-holes and the ceiling had collapsed. The family sleeps in the abandoned home of a neighbor who agreed to let them stay there, and Hawlani visits her house every day to clean the floor and tend to chickens that roam the backyard.

“We are left with nothing, we can’t live in the house at all,” she said. “It is very painful.”

The house may one day be rebuilt, but the war’s scars will remain. Hawlani’s cousin, an army colonel, was killed while fighting insurgents. “My cousin was martyred. How can I forgive them when my cousin is dead? Did he die in vain? Of course not.”

Abu Samer al-Kardoun, a 70-year-old resident, remembers the city as a diverse and tolerant place, before the civil war gave rise to extremist groups and sectarian militias.

“We used to live together as Muslims, Sunnis, Alawites, Christians, Druze and everything. We never asked anyone about their religion,” he said as he played backgammon with other elderly men. “May God lift off this trouble and bring back this country as it was.”