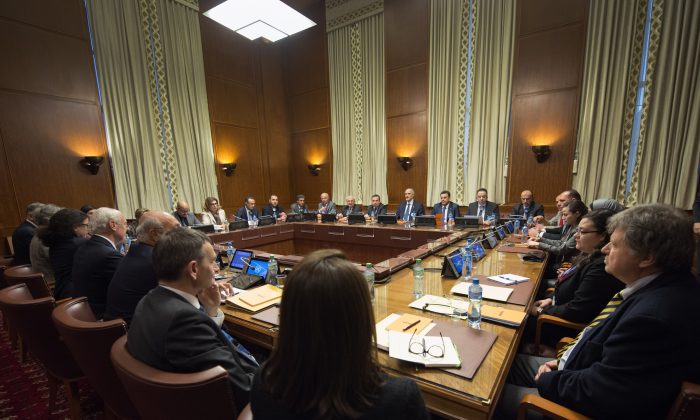 Overview of the Syria peace talks in Geneva, Switzerland, on Jan. 29, 2016. Indirect peace talks aimed at resolving Syria’s 5-year conflict began Friday at the U.N. headquarters in Geneva, without the participation of the main opposition group. (Martial Trezzini/Keystone via AP)
International

The indirect peace talks began here Friday with a meeting between the United Nations envoy and the Syrian government delegation. The main opposition group, the Higher Negotiations Committee or HNC, boycotted that session saying it won’t take part until a set of preliminary demands are met: releasing detainees, ending the bombardment of civilians by Russian and Syrian forces, and lifting government blockades on rebel-held areas.

The HNC later agreed to send a delegation to Geneva to meet with U.N. officials, while still insisting it would not negotiate until their demands are met. The HNC decision to send a team to Geneva gave a glimmer of hope that peace efforts in Syria might actually get off the ground for the first time since two earlier rounds of negotiations collapsed in 2014.

Meanwhile officials from Syria’s largest Kurdish group left Geneva Saturday after being excluded from the negotiations, a Kurdish official and opposition figures said.

Saleh Muslim, co-president of the Democratic Union Party, or PYD, left when it became clear he would not be invited to participate, according to Kurdish official Nawaf Khalil.

The participation of the PYD has been a divisive issue in advance of the Geneva talks. Turkey, which has struggled with its own large Kurdish population, considers the PYD a terrorist organization and the HNC claims they are too close to the Syrian government.

Unlike other groups from outside the HNC that were invited as advisers, the PYD received no invitation from U.N. Special Envoy to Syria Staffan de Mistura.

The move to exclude the PYD angered Qadri Jamil, a former Syrian deputy prime minister who has become a leading opposition figure but is not part of the HNC. Jamil said the PYD’s military wing has been the most effective force on the ground in Syria fighting the Islamic State (ISIS).

“The PYD is a historic part of the Syrian democratic opposition and PYD today is fighting terrorism on the ground and it is a main force,” Jamil told a group of journalists in Geneva on Saturday.

Jamil said they are working with the U.N. to resolve the crisis regarding the representation of the PYD.

Bassam Bitar of the opposition’s Movement for a Pluralistic Society said the PYD will most likely be invited to take part in future rounds of negotiations.