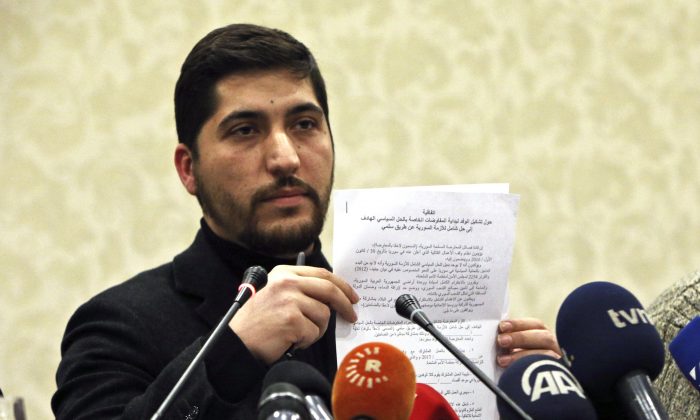 Osama Abu Zeid of the the main moderate Syrian opposition group Free Syrian Army, shows what he said is a copy of the five-point cease-fire agreement for Syria, during a news conference in Ankara, Turkey, on Dec. 29, 2016. (AP Photo/Burhan Ozbilici)
International

BEIRUT—A nationwide Syrian cease-fire brokered by Russia and Turkey that went into effect at midnight was holding Friday despite minor violations, marking a potential breakthrough in a conflict that has been shredding high-level peace initiatives for over five years.

The Britain-based Syrian Observatory for Human Rights reported clashes early Friday between troops and rebels in the central province of Hama and near the capital, Damascus, but said there have been no reports of civilian casualties since the truce began.

Opposition activist Mazen al-Shami, who is based in the Damascus suburb of Douma, said minor clashes nearby left one rebel wounded. Activist Ahmad al-Masalmeh, in the southern Daraa province, said government forces had opened fire on rebel-held areas.

Several past attempts at halting the fighting have failed. As with previous agreements, the current cease-fire excludes both the al-Qaida-affiliated Fatah al-Sham Front, which fights alongside other rebel factions and ISIS.

Russian President Vladimir Putin said Thursday that the cease-fire will be guaranteed by both Moscow and Turkey, and the agreement has been welcomed by Iran. Moscow and Tehran provide crucial military support to Syrian President Bashar Assad, while Turkey has long served as a rear base and source of supplies for the rebels.

Russia said the deal was signed by seven of Syria’s major rebel factions, though none of them immediately confirmed it, and one denied signing it.

The truce came on the heels of a Russian-Turkish agreement earlier this month to evacuate the last rebels from eastern Aleppo after they were confined to a tiny enclave by a government offensive. The retaking of all of Aleppo marked Assad’s greatest victory since the start of the 2011 uprising against his family’s four-decade rule.

“The defeat of the terrorists in Aleppo is an important step toward ending the war,” Assad said in an interview with TG5, an Italian TV station, adding that the capture of the city does not mean that the war has ended because “terrorists” are still in Syria.

The United States was left out of both agreements, reflecting the deterioration of relations between Moscow and Washington after the failure of previous diplomatic efforts on Syria.

In an interview with TG5, and Italian TV station, Assad said “we are more optimistic, with caution,” about the incoming administration of President-elect Donald Trump, who has suggested greater cooperation with Russia against extremist groups.

“We can say part of the optimism could be related to better relation between the United States and Russia,” Assad said, speaking in English.

“Mr. Trump, during his campaign – (said) that his priority is fighting terrorism, and we believe that this is the beginning of the solution, if he can implement what he announced,” Assad said in the interview, which was apparently filmed before the cease-fire was announced.

Turkey’s state-run Anadolu Agency meanwhile quoted the military as saying Russia carried out three airstrikes against ISIS targets near the northern town of al-Bab, where Turkish troops and allied Syrian opposition forces have been battling the extremist group. The strikes indicated that Russia and Turkey may work together to combat ISIS once the fighting elsewhere in Syria has been halted.

The Turkish military statement quoted by Anadolu did not say when the Russian air strikes took place, but said they killed 12 ISIS militants.

Separately, 26 ISIS militants, including some senior commanders, were killed in Turkish airstrikes on al-Bab and the Daglabash region, and some 17 ISIS targets were destroyed, Anadolu reported. It said a Turkish soldier was kill in an ISIS attack on troops south of the al-Azrak area.

Turkey sent troops and tanks into northern Syria in August to help opposition forces clear a border area of ISIS militants and curb the advances of U.S.-backed Syrian Kurdish fighters, who are also battling the extremist group.