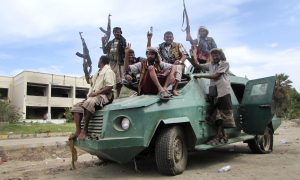 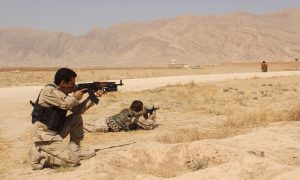 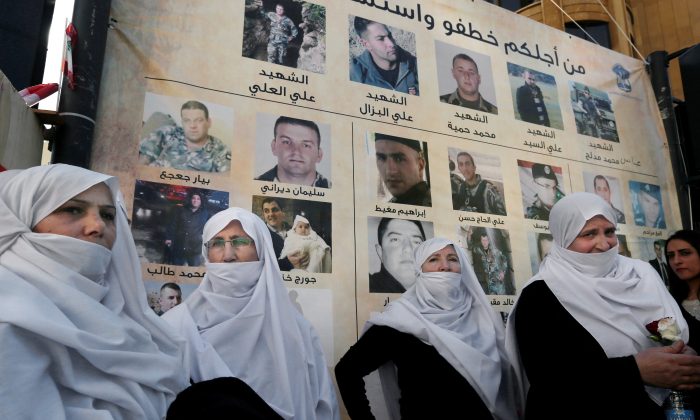 Lebanese Druze women stand next to posters with pictures of soldiers and policemen who were kidnapped by militants from the Islamic State and al-Qaida's branch in Syria, the Nusra Front, during a protest in downtown Beirut, Lebanon, Tuesday, Dec. 1, 2015. Syria's al-Qaida branch was releasing on Tuesday a group of Lebanese soldiers and policemen held captive since August 2014 as part of a swap deal brokered by Qatar that included Lebanon setting free an unspecified number of prisoners wanted by the militant group. (AP Photo/Bilal Hussein)
Middle East

BEIRUT—Al-Qaida’s affiliate in Syria released more than a dozen Lebanese soldiers and police it has held for more than a year on Tuesday as part of a Qatar-brokered deal in which Lebanon freed at least 11 prisoners, including a former wife of Islamic State leader Abu Bakr al-Baghdadi.

The release caps Lebanon’s lengthy ordeal over the fate of its soldiers while also providing the al-Qaida branch, known as the Nusra Front, with new leverage as a group that can be negotiated with.

“My happiness is beyond description,” said a Lebanese policeman, one of the 16 released on Tuesday, shortly after he was brought to the point where the exchange took place in the eastern town of Arsal, near the Syrian border.

Families and friends of the abducted soldiers and policemen, who have held a months-long sit-in in downtown Beirut, broke into a dance and cheered as news of the release reached them. Families were showered with rose petals and friends passed around sweets to the media and visitors who showed up to offer congratulations.

Earlier in the day, masked Nusra Front fighters brought the captive troops in three pickup trucks to a meeting point on the edge of Arsal to be handed over to Lebanese authorities, who were waiting along with Red Cross vehicles and the 11 prisoners who were part of the exchange.

Militants waving black al-Qaida flags fanned out across the area, with several taking positions on the roof of a building overlooking the location. The deal went ahead after trucks carrying humanitarian aid entered Arsal as part of the deal.

Later Tuesday, Qatar’s Foreign Ministry acknowledged that it had brokered the deal, saying it had received requests from the Lebanese government to negotiate.

The Gulf nation, a strong supporter of insurgents fighting to topple Syrian President Bashar Assad, relishes its role as a regional mediator and maintains channels to a broad range of parties, including Islamic militant groups like the Afghan Taliban.

“Qatar pressured Nusra Front to end this crisis in order to introduce the Nusra Front as a group that negotiates. This is linked to the Vienna talks,” said Radwan Mortada, an expert on jihadi groups who writes for Lebanon’s Al-Akhbar daily newspaper.

Murtada was referring to a peace plan agreed to last month by 17 nations meeting in Vienna that sets a Jan. 1 deadline for the start of negotiations between Assad’s government and opposition groups.

The Nusra Front is not expected to take part in the talks as it is considered a terrorist organization by most countries, including the United States and Russia.

Syria’s main Western-backed opposition group, the Syrian National Coalition, has called on the Nusra Front to disassociate itself from the global network founded by Osama bin Laden. Nusra Front, one of the most powerful factions in the country, has so far refused to cuts its links with al-Qaida or abandon its jihadi ideology.

Several previous attempts to secure a deal with the Nusra Front to release the captives had ended in failure. Frustrated relatives held protests, often blocking main roads with their bodies, to no avail.

Pan-Arab satellite channel Al-Jazeera, along with the Lebanese local MTV station, broadcast the troops’ release. The captives were seen sporting beards but appeared to be in good health.

A few hours later, the troops arrived at the government headquarters in Beirut, clean-shaven and wearing their military uniforms. They were received by top officials, including Prime Minister Tammam Salam, and were reunited with their families.

Suleiman Dirani, one of those held captive, thanked “our brothers” from the Nusra Front for what he said was good treatment. “We are leaving here as we came, we are all in good health,” he said.

At least 11 prisoners in Lebanese jails, including five women, were released as part of the deal, according to a senior Lebanese security official.

The group included Saja al-Dulaimi, the 26-year-old former wife of the leader of the Islamic State (ISIS), said the official, speaking on condition of anonymity in line with regulations. Al-Dulaimi was detained in Lebanon last year after she crossed into the country illegally with her current husband using forged identity cards.

Al-Jazeera said 13 prisoners were handed over to Nusra Front. It was not immediately clear whether that number included two prisoners held by the Syrian government. Local media had reported that the deal may include prisoners held in Syria.

Al-Dulaimi, who appeared in Lebanese court for a hearing last month, was seen along with her four children at the meeting point Tuesday.

“They say that I was the wife of al-Baghdadi. I don’t know, we have been divorced for six or seven years,” she told Al-Jazeera upon her arrival.

Asked what she plans to do after her release, al-Dulaimi, who had her face veiled, said she wanted to go live in Turkey.

She spoke from inside an SUV, holding in her arms her four-month-old son Youssef, who was born while she was in jail. Al-Baghdadi’s daughter, seven-year-old Hajar, was also in the car.

The Nusra Front and ISIS abducted 29 soldiers and policemen in Arsal last year when they briefly overran the town. Four have been killed in captivity while ISIS has refused to negotiate over the nine captives it holds.