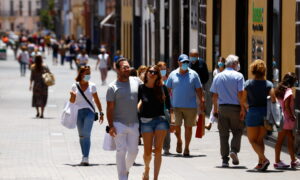 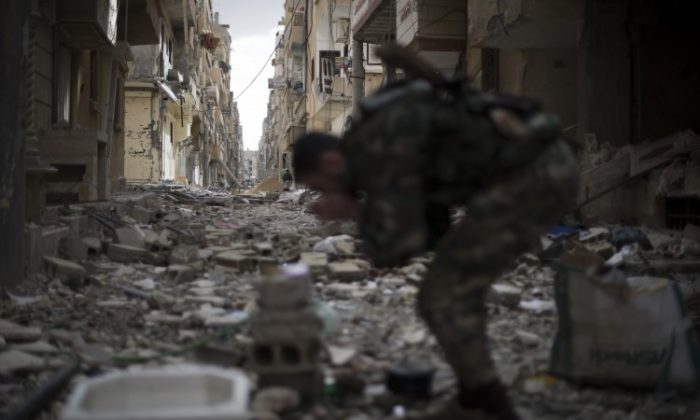 A Syrian opposition fighter rubs dust from his face in the Jabilleh neighbourhood of the eastern city of Deiz Ezzor, during clashes with regime forces as they try to retake the area on Feb. 16, 2013. (Zac Baillie/AFP/Getty Images)
Middle East

Syrian War Criminals Should be Investigated by ICC, UN Says

An independent United Nations panel has identified individuals suspected of carrying out war crimes in Syria and suggested a referral to the International Criminal Court.

“Where possible, individuals in leadership positions who may be responsible were identified alongside those who physically carried out the acts,” a report from the panel said, without elaborating on who those individuals are.

The commission said that both the Syrian army and the rebels, including the Free Syrian Army, were responsible for war crimes committed during the 23-month conflict. It also said there has been a prevalence of “Salafi groups,” or Islamic militants, in the Syrian conflict.

Both parties are accused of extrajudicial killings, torture, pillaging, rapes, and spreading terror throughout Syria.

The conflict, it said, has become more and more sectarian in nature, and not just between government and anti-government forces. “Increasingly radical ideologies are gradually defining the character of the conflict,” the report states, noting that in recent months, the al-Nusra Front has emerged as one of the most aggressive and sophisticated Islamic militant groups.

With the deteriorating situation, the panel said there is an urgent need for international organizations to step in and make sure war crimes perpetrators are held accountable.

“In March 2013, a confidential list of individuals and units believed to be responsible for crimes will be submitted to the United Nations High Commissioner for Human Rights,” the report said after compiling 445 interviews between July and January.

The country has devolved into scenes of “continuous combat” that feature “more brutal tactics and new military capabilities on all sides,” reads a news release from the U.N. human rights office.

To counter the growing levels of impunity among both parties, the U.N. panel recommends referring them to the International Criminal Court (ICC). However, the decision to relay Syria’s case to the ICC is contingent on a decision from the U.N. Security Council, which includes Syrian ally Russia as well as China. At present, there is a rift between members of the Security Council over how to deal with Syria.

The London-based Syrian Observatory for Human Rights said that on Monday some 90 Syrians were killed. Bombardments and clashes were reported throughout the country.

The Local Coordination Committees, a pro-opposition rights group, said there were reports of five Scud missiles being fired on Sunday. Cluster bomb use, heavy mortar fire, and artillery shelling were also reported across Syria.

Since the U.N. started keeping figures, more than 820,000 Syrians have sought refuge in neighboring countries. More than 60,000 people have been killed since the conflict erupted in March 2011.