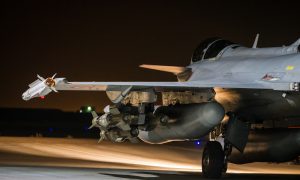 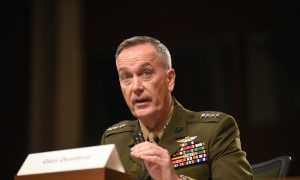 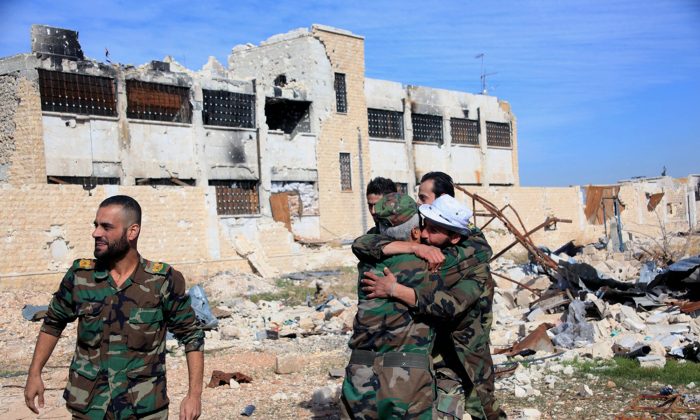 Syrian government troops hug each other in celebration inside the Kweiras air base, east of Aleppo, Syria, Wednesday, Nov. 11. (SANA via AP)
Middle East

DAMASCUS, Syria—Syrian troops backed by Russian airstrikes captured areas from the ISIS group in the central province of Homs on Monday, in the latest push since the aerial campaign began nearly two months ago, state media and a monitoring group said.

The Britain-based Syrian Observatory for Human Rights said troops backed by pro-government gunmen entered the town of Mheen and the nearby village of Hawareen after midnight Sunday and were in full control of the area hours later.

Syrian state TV also reported that Mheen and Hawareen were captured, adding that government forces are now removing the mines and explosives left behind by the extremist group to try to slow down the army’s advance.

“A big victory was achieved by our heroes,” said a Syrian TV reporter embedded with government troops in Mheen.

The capture of Mheen and Hawareen helps secure the highway linking the capital Damascus to the central city of Homs. The government’s next push is expected to target the nearby town of Qaryatain and later the historic town of Palmyra, which was taken by ISIS in May.

Syrian President Bashar Assad said in remarks published Sunday that his forces are advancing on “almost” all fronts thanks to Russian airstrikes.

Russia has conducted an air campaign in Syria since Sept. 30, and the airstrikes have sharply intensified in recent days.

The head of the Observatory, Rami Abdurrahman, said Russian warplanes and helicopter gunships played a major role in opening the way for troops to advance in the desert near Homs. He added that around 50 ISIS fighters were killed in days of fighting in Mheen, Hawareen and surrounding areas.

Syrian troops have captured dozens of villages in northern, western and central Syria since the Russian airstrikes began.

The Observatory said the Russian airstrikes have killed 403 civilians, including 97 children under the age of 18. It said the strikes killed 381 ISIS extremists as well as 547 gunmen from other insurgent groups.

The Violations Documentation Center in Syria, an activist group that keeps track of Syria’s dead, wounded and missing persons, said that the first 45 days of Russian airstrikes killed 526 civilians, including 137 children and 71 women.

In neighboring Iraq, the country’s Civil Aviation Authority suspended flights to the northern Kurdish self-ruled region for two days starting Monday due to Russia’s air campaign in Syria, it said in a statement late Sunday.

The statement said the suspension of flights to the cities of Irbil and Sulaimaniyah is to “protect travelers” as cruise missiles and bombers cross northern Iraq from the Caspian Sea to Syria. It said airports in other parts of the country will operate normally.

In September, an intelligence sharing center was set up in Baghdad by Russia, Iraq, Iran and Syria to coordinate efforts to combat ISIS.