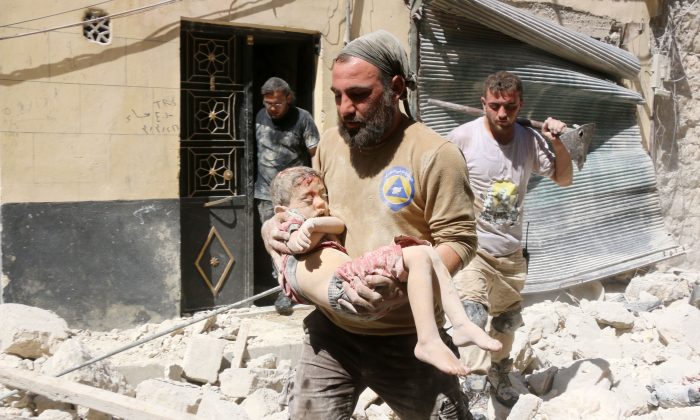 A Syrian civil defence worker carries the body of a child following reported airstrikes on July 17, 2016 in the rebel-controlled neighborhood of Maysar in the northern Syrian city of Aleppo. (Thaer Mohammed/AFP/Getty Images)
Middle East

BEIRUT—Syrian government forces closed the only road leading into and out of rebel-held parts of the northern city of Aleppo on Sunday, besieging hundreds of thousands of people and raising fears of a humanitarian crisis, opposition activists said.

The siege marks the biggest success for the government in Aleppo since rebels captured parts of the city in the summer of 2012. Aleppo, Syria’s former commercial center and the country’s largest city, has been contested since then.

Aleppo and its suburbs have seen intense fighting in recent months, with Syrian troops and their allies advancing with the aid of Russian airstrikes. Earlier this year the government launched a wide offensive that captured much of the city’s northern outskirts.

US Boosts Aid to Syria War-Affected by $439 Million

The Britain-based Syrian Observatory for Human Rights said government forces and members of Lebanon’s Hezbollah group reached the Castello road early Sunday, closing it and raising fears of a humanitarian crisis. Government forces reached a point where they could fire on the road earlier this month, effectively cutting it off, though some people still made the dangerous journey.

“Aleppo is under full ground siege after the regime took some points on the road,” Aleppo-based activist Bahaa al-Halaby told The Associated Press by telephone. He added that as of Sunday, food and medical supplies will not be able to reach rebel-held parts of the city and seriously wounded people will not be taken for treatment in other parts of northern Syria or Turkey.

The U.N. has warned that nearly 300,000 people rely on the Castello road for travel, food and medicine.

Another activist based in Aleppo said the city is being subjected to intense shelling and airstrikes. Baraa al-Halaby, who is not related to Bahaa, said vegetable and fruit markets were almost empty on Sunday morning and that residents were lining up outside bakeries.

“Humanitarian conditions are difficult,” he said.

The siege on rebel-held parts of the city came hours after mysterious explosions rocked the so-called Defense Factories, a sprawling government military facility outside the town of Safira just south of Aleppo.

The Observatory said the cause of the explosions is not clear, but that they killed at least 10 people and caused heavy damage.

State news agency SANA said the explosions were caused by a technical failure. It did not elaborate.