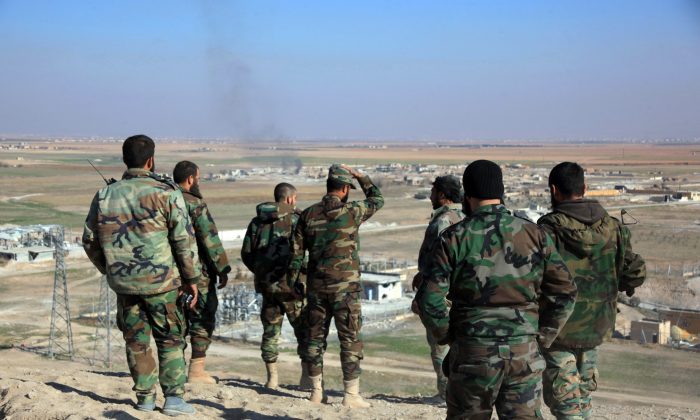 Syrian pro-government fighters look at smoke rising on the horizon following government airstrikes on the Tal Sharba area, on the outskirts of the northern Syrian city of Aleppo, after they seized the area from Islamic State (ISIS) jihadists on Dec. 27, 2015. (George Ourfalian/AFP/Getty Images)
Middle East

Syrian Troops Advance in South and Center, Drive Back Rebels

BEIRUT—Syrian forces have retaken a key southern military base after heavy fighting with rebels and an al-Qaida affiliate, and seized mountain villages after driving out Islamic State (ISIS) fighters, the government and opposition activists said Tuesday.

The advances came after the army killed 17 fighters from Islamic rebel factions gathered at farmhouses in the southern Daraa province late Saturday, and also eliminated a powerful rebel leader on the outskirts of Damascus a day earlier.

On Tuesday, government forces backed by allies captured the base of Brigade 82 in the town of Sheikh al-Maskeen, also in the Daraa area, which rebels had captured last January, the two sides said, adding that the troops also took control of the northern part of the town. The area is some 90 kilometers (56 miles) from the capital, Damascus.

“It’s a very important gain for the regime forces. They’ve now cut the road between Daraa and Damascus,” said Rami Abdurrahman of the Britain-based Syrian Observatory for Human Rights.

Daraa was the birthplace of the 2011 uprising against President Bashar Assad, which began with mostly peaceful protests but escalated into a civil war following a harsh crackdown on dissent. The conflict has killed more than 250,000 people and generated a massive refugee crisis.

Abdurrahman said the fighting began a day earlier and that among the rebels were fighters from al-Qaida’s Syrian affiliate, the Nusra Front, as well as various Islamic factions. Government troops were bolstered by Iranian officers, pro-government militiamen and Lebanese Hezbollah fighters, as well as some 80 airstrikes from the government side, possibly including some from Russian aircraft, he added.

Assad’s forces have been on a major push since Russia began an air campaign in Syria on Sept. 30. Syrian troops and allied militiamen have launched ground offensives in different parts of the country, including areas near Damascus.

The latest developments could boost the government’s position ahead of peace talks in Geneva next month.

Ahmad al-Masalmeh, an opposition activist in Daraa, said rockets, artillery, mortars and heavy machine guns had been used in and around Sheikh al-Maskeen. He said the government had advanced on the base but had not completely captured it.

State news agency SANA said the army inflicted heavy losses on the militants, but did not give a death toll. Abdurrahman said dozens were killed on both sides, without giving a breakdown. Al-Masalmeh said the rebels lost some 20 fighters in two days of fighting, with 35 killed on the government side as well as eight civilians.

All sides said fighting in the area was ongoing.

Meanwhile in the Maheen area to the southeast of the central city of Homs, government forces took several towns and positions, consolidating their hold of an area around the city, the Observatory and SANA said. Homs was once known as the “capital of the revolution,” but is now under almost complete government control.

The Observatory, which relies on local activists across Syria, said government warplanes carried out dozens of raids on ISIS positions. SANA said Syrian troops had established full control of Maheen town and the nearby mountains, as well as the villages of Al-Hadath and Hawareen.

Government forces managed to “wipe out” the last group of ISIS fighters in the area and are now pursuing their remnants toward al-Qaryatain city, SANA said.