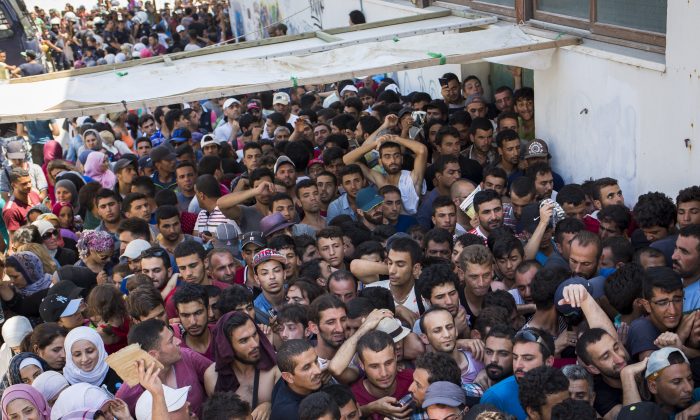 Syrian Refugees—How Many More Can We Afford?

Ten people want to move into your house. The reasons may be good such as there has been violence in their neighborhood or life in general has been bad where they currently live. These same people would also need for you to provide them with cash, food, education assistance, childcare, and most likely half of the ten would need this assistance for the rest of their lives. You couldn’t financially afford to do it. The United States is not doing it so well either.

Welcome to refugee land—the United States of America! We have at least 10,000 Syrian refugees coming but that’s not many in comparison to the three million plus refugees we’ve received since 1975. Since 1980 our annual refugee intake has been at about 98,000 per year. This doesn’t count another 40,000 per year in asylum seekers and Cuban/Haitian entrants. They have the same rights and entitlements as refugees.

The pressure to take thousands of Syrians is now upon our country. Ten thousand has been the most recent announced number by our President. However, as millions flee wore-torn Syria the world eyes America in hopes that we will take far more than a few thousand. Who can blame the Syrian refugees? I would want to get out of Syria. The problem is more than Syria. We take refugees from all over the planet and the intake is costing us billions. How far can we go? How many more can we afford? We can’t even afford to write our elderly social security checks every month and yet we receive 90,000 to 100,000 more refugees every year.

In 2012 the leading countries in order of numbers of refugees sent to the United States were Bhutan, Burma, Iraq, Somalia, Cuba, Democratic Republic of the Congo, Iran, Eritrea, and Sudan. Was this really the responsibility of the United States to receive 100,000 people from these countries? In 47 percent of the cases they didn’t even reimburse our country for their plane tickets to America.

Refugee resettlement is a self-perpetuating global enterprise. Staff and management of the hundreds of taxpayer supported U.S. contractors are largely refugees or immigrants whose purpose is to gain entry for more refugees, usually for their co-ethnics. While refugees are winners, non-profits who orchestrate refugee placement are big financial winners and need to be monitored more. They are: U.S. Conference of Catholic Bishops, Lutheran Immigrant Aid Society, International Rescue Committee, Church World Service, Episcopal Church of the USA, and there are more.

As some Americans are pushed off time limited welfare programs many refugees are going on to lifetime cash assistance programs. 12.7 percent of refugees are on SSI—a lifetime entitlement to a monthly check/Medicaid for the elderly or disabled. This rate of usage is at least four times higher than the rate of usage for SSI among the native-born population and is reportedly rising from these already very high levels. Permanent and intergenerational welfare dependence has been allowed to take hold to a significant degree in some refugee groups.

Be very aware of our refugee crisis in this nation. How many more can we transport, feed, house, and clothe? Eventually our entire welfare system will collapse. Maybe we should seriously consider just how many more can we really afford?

Glenn Mollette is an American syndicated columnist and writer who lives in Newburgh, Indiana. He authored eleven books, including “American Issues.”