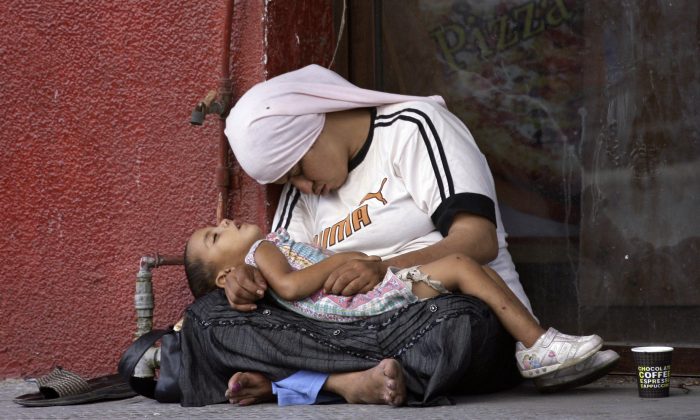 A Syrian refugee woman holds her child as they doze off on the sidewalk of a street in the southern Lebanese city of Sidon on July 18, 2013. The exodus of Syrian refugees accelerated dramatically in recent months, with over 1 million refugees arriving in the first five months of 2013 alone. More than half of registered refugees are children and three-quarters of registered refugees are living with local host families and communities in both urban and rural areas. (Mahmoud Zayyat/AFP/Getty Images)
Opinion

The number of Syrian refugees continues to grow at an alarming rate, and no end is in sight for those affected by the conflict. What makes their plight even more painful is that of all the countries directly or indirectly involved in the conflict, Russia, the United States, China, Iran, Great Britain, and France, have so far been reluctant to take those refugees into their own countries. Instead, Syrian refugees have overburdened the health and social services of neighboring countries, such as Lebanon and Jordan.

According to António Guterres, the United Nations High Commissioner for Refugees, the number of people fleeing the conflict has reached an average of 6,000 a day during 2013, a rate not seen since the Rwandan genocide nearly two decades ago.

Nawaf Salam, Lebanon’s ambassador to the United Nations, warned that the number of Syrian refugees coming into Lebanon could surpass 1 million by the end of 2013 and could have serious consequences on the ability of social services to provide help to those in need. Since Lebanon has a population of about 4 million, that number would be the equivalent of 75 million refugees coming into the United States.

“Pressures are mounting, and the needs of the Syrian refugees may surpass Lebanon’s capabilities,” said the ambassador. As he was asking the U.N. Security Council for help in dealing with the situation, he stated that Lebanon “will not close its border in front of refugees fleeing violence and destruction, and we will not stop delivering aid.” Also worrisome, said Salam, is that the “increasing cross border fire and incursions from Syria in Lebanon are threatening the security and stability of Lebanon.”

Some countries are already restricting the income of Syrian refugees. Such is the case of Egypt. According to the United Nations High Commissioner for Refugees, Syrians going into Egypt are now being turned away. Egypt’s change in policy follows what is happening also in Iraq, Turkey, and Jordan, all of which are trying to stem the refugee inflow.

The 1951 U.N. Convention on the Status of Refugees has established the rights of refugees and the obligations of host countries. Although Egypt is a signatory, its latest decision goes against the tenets of the treaty and the principle of <i>refoulement</i>, according to which “No Contracting State shall expel or return (‘refouler’) a refugee in any manner whatsoever to the frontiers of territories where his life or freedom would be threatened on account of his race, religion, nationality, membership of a particular social group, or political opinion.”

Fear that Syrian refugees will also bring political problems has led countries such as Iraq to close its borders to incoming refugees. “Basically the government is citing security concerns and fear of spill over of the Syrian conflict into Iraq as the main reason for its policy,” stated Natalia Prokopchuk, a UNHCR officer in Baghdad.

An estimated 5 million people out of Syria’s 21 million have become displaced within their own country. In addition, almost 7 million people are in need of humanitarian assistance inside Syria. Also, based on arrival trends since the beginning of 2013, it is now estimated that 3.45 million Syrian refugees will be in need of assistance by the end of the year.

More than half the refugees fleeing Syria are children, who are traumatized by the conflict that has left them without homes, family members, and the social support given by friends and extended family. Many children affected by the conflict will need long-term psychological support since they may experience Post Traumatic Stress Disorder (PTSD).

Refugee children’s health situation may be affected in other ways. As stated by Maria Calivis, UNICEF regional director for the Middle East and North Africa, “Without enough safe water and sanitation, the likelihood will rise that children in Syria and those living as refugees around the region will fall sick with diarrhea and other diseases.” In addition, up to 2 million children inside Syria’s borders run the risk of not receiving lifesaving vaccinations and other critical medical care.

What the American writer Frederic Prokosch in his famed novel <i>The Asiatics</i> wrote about Aleppo, “Aleppo was a large and terrifying town,” can now be applied to all of that suffering country. As Valerie Amos, U.N. aid chief clearly stated, “The world is not only watching the destruction of a country but also of its people.”