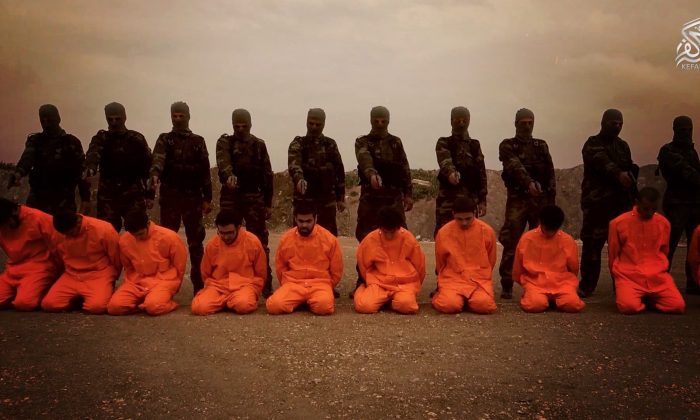 Screenshot from the video
Middle East

A Syrian rebel group released a video of what appears to be the executions of more than a dozen members of ISIS, but this one had a strange twist at the end: the ISIS militants weren’t executed.

The footage, titled “Muslims Are Not Criminals,” was uploaded this week by the Sham Front, according to Vocativ. The footage shows 10 men clad in orange jumpsuits, the same kind that ISIS is using in its videos.

The rebels then have the men kneel and the rebels point pistols at the ISIS fighters’ heads but they don’t pull the trigger.

Instead, they take off their masks and holster their weapons and a Muslim preacher comes in and speaks.

“We are not sympathizers of killing, slaughtering and terror,” the preacher then says in the video. “Our religion is justice and Islam is the crown on top of our heads. Good deeds are our principle.”

The prisoners are then led back to prison.

The footage, which was circulated on social media, was shot in a similar style as ISIS’ videos.

A number of people were sharing the video in the wake of the shooting at a San Bernardino social services center that left 14 people dead last week. Some also linked it to Republican Presidential candidate Donald Trump’s remarks that Muslims should not be allowed to enter the U.S. until officials can “figure out what is going on.”

Meanwhile, ISIS apparently released a video that show child soldiers playing a game of “hide and seek” that involves the killing of helpless prisoners by shooting them in the head.

According to the Daily Mail, the violent footage was recorded in Deir Ezzor province in Syria. It shows the children running in a maze of stone corridors before they find a prisoner. After that, they approach the prisoner, who are accused of spying for Assad forces, and shoot the men in the head.