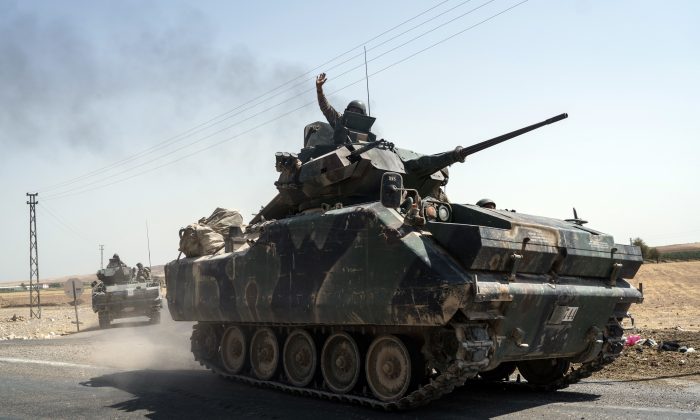 BEIRUT—Turkey-backed Syrian rebels seized a number of villages and towns from Kurdish-led forces in northern Syria on Sunday amid Turkish airstrikes and shelling that killed at least 35 people, mostly civilians, according to rebels and a monitoring group.

Turkey sent tanks across the border to help Syrian rebels drive the Islamic State (ISIS) out of the frontier town of Jarablus last week in a dramatic escalation of its involvement in the Syrian civil war.

The operation, labeled Euphrates Shield, is also aimed at pushing back U.S.-allied Kurdish forces. The fighting pits a NATO ally against a U.S.-backed proxy that is the most effective ground force battling ISIS in Syria.

Turkey’s military said its warplanes killed 25 Kurdish “terrorists” and destroyed five buildings used by the fighters in response to attacks on advancing Turkish-backed rebels in the Jarablus area.

A Turkish soldier was killed by a Kurdish rocket attack late Saturday, the first such fatality in the offensive, now in its fifth day.

Various factions of the Turkey-backed Syrian rebels said Sunday they had seized at least four villages and one town from Kurdish-led forces south of Jarablus. One of the villages to change hands was Amarneh, where clashes had been fiercest. Rebels posted pictures from inside the village.

Ankara is deeply suspicious of the Syrian Kurdish militia that dominates the U.S.-backed Syria Democratic Forces, viewing it as an extension of the Kurdish insurgency raging in southeastern Turkey. Turkish leaders have vowed to drive both ISIS and the Kurdish People’s Protection Units, or YPG, away from the border.

The SDF crossed the Euphrates River and drove ISIS out of Manbij, a key supply hub just south of Jarablus, earlier this month. Both Turkey and the United States have ordered the YPG to withdraw to the east bank of the river. YPG leaders say they have, but their units play an advisory role to the SDF and it is not clear if any of their forces remain west of the Euphrates.

Turkey is part of the U.S.-led coalition fighting ISIS, but the airstrikes that began Saturday marked the first time it has targeted Kurdish-led forces in Syria.

The Britain-based Syrian Observatory for Human Rights said the bombing killed at least 20 civilians and four Kurdish-led fighters in Beir Khoussa, a village about 9 miles (15 kilometers) south of Jarablus, and another 15 in a village to the west.

ANHA, the news agency of the Kurdish semi-autonomous areas, said Beir Khoussa has “reportedly lost all its residents.”

Civil Liberties Must Be Balanced With Security in Battling Terrorism, PM Says

SDF spokesman Shervan Darwish said the airstrikes and shelling started overnight and continued Sunday along the front line, killing many civilians in Beir Khoussa and nearby areas. He said the bombing also targeted Amarneh village. He said 50 Turkish tanks were taking part in the offensive.

Syrian state news agency SANA reported that 20 civilians were killed and 50 wounded in Turkish artillery shelling and airstrikes, calling it Turkish “encroachment” on Syrian sovereignty under the pretext of fighting ISIS. Turkey is a leading backer of the rebels fighting to overthrow Syrian President Bashar Assad. But both Ankara and Damascus share concerns over Kurdish ambitions for autonomy.

An Associated Press reporter in the Turkish border town of Karkamis spotted at least three Turkish jets flying into Syria amid heavy Turkish shelling from inside Syrian territory on Sunday morning.

Also Sunday, government warplanes renewed their air campaign against the besieged neighborhood of al-Waer in the central city of Homs. An activist in the neighborhood Bebars al-Talawy said at least a dozen airstrikes were launched Sunday, killing one person.

The neighborhood came under a grueling airstrike campaign a day earlier, including incendiary bombs that left two children, a brother and sister, badly charred. Images of other children shaking as doctors tried to treat them for the burns were posted on social media sites. The district’s hospital was bombed and made non-operational earlier this month.

Human Rights Watch announced recently that it had documented the use of incendiary weapons, which burn their victims and start fires, in at least 18 different instances between June and August in rebel-held areas. The group blamed the Russian and Syrian joint military operations room for the use of such weapons in violation of international law.

The neighborhood, home to nearly 75,000 people, has been under siege since March and has been one area that U.N agencies have reported difficult to access. An aid convoy reached the area on Aug.25.

According to local residents, the escalation follows recent threats by soldiers at checkpoints that the government’s patience was running out with the district, the last rebel holdout in the city.

It also comes after the evacuation of Daraya, a Damascus suburb, following a deal struck with the government after a grueling bombing campaign and a tight siege.

The Homs Local Council appealed to the U.N. envoy to Syria to negotiate a truce for al-Waer, condemning the government’s “siege policy” that aims to force residents and local fighters to surrender.