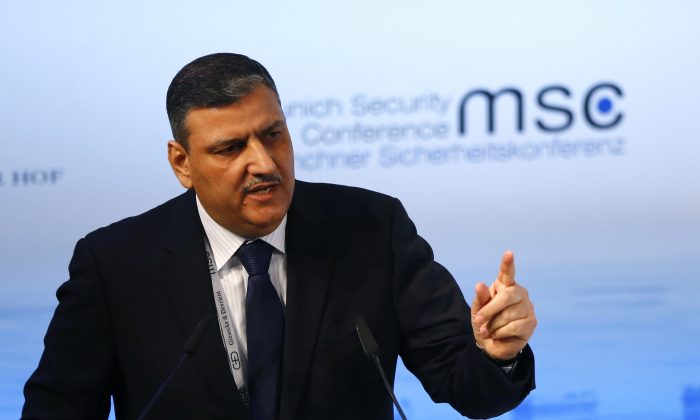 MUNICH—A top Syrian opposition figure criticized Russia on Sunday for continuing with its bombing in Syria, insisting that people in the country need to see action rather than words.

I would like to see a single day of a cessation of hostilities in order to give a chance for real political movement.
— Riad Hijab, head, Syrian opposition's High Negotiations Committee

Diplomats from a group of countries that have interests in Syria’s five-year civil war, including the U.S., Russia, Turkey, Saudi Arabia and Iran, agreed on Friday to seek a temporary “cessation of hostilities” within a week. They also agreed to “accelerate and expand” deliveries of humanitarian aid to besieged Syrian communities beginning this week.

It remains unclear whether those commitments can be made to stick on the ground and whether deep differences regarding the truce and which groups would be eligible for it—between the U.S. and Russia among others—can be overcome.

The truce deal in Munich comes as Syrian government forces, aided by a Russian bombing campaign, are trying to encircle rebels in Aleppo, the country’s largest city, and cut off their supply route to Turkey.

Hijab questioned whether the continued fighting by Russia was “a seriously acceptable position to the international community.”

“We have gotten used to conferences and words put into hope, but what we need is action—and the action that I see is that Russia is killing Syrian civilians,” Hijab told the Munich Security Conference, an annual gathering of foreign and security policy leaders.

We have gotten used to conferences and words put into hope, but what we need is action—and the action that I see is that Russia is killing Syrian civilians.
— Riad Hijab, head, Syrian opposition's High Negotiations Committee

“Let’s be clear about what this agreement does: it permits the assault on Aleppo to continue for another week. It requires opposition groups to stop fighting, but it allows Russia to continue bombing terrorists—which it insists is everyone, even civilians,” said McCain, who chairs the Senate Armed Services Committee.

McCain said that Russian President Vladimir Putin “is not interested in being our partner. He wants to shore up the Assad regime. He wants to re-establish Russia as a major power in the Middle East.”

On Saturday, Russian Prime Minister Dmitry Medvedev told the Munich conference there was no evidence that Russia was bombing Syrian civilians.

Hijab complained that the Syrian people have “been shredded and abandoned by the international community” over the past five years and have not seen any “leadership, specifically by the United States of America.”

“For war you need two parties, there is one very active… in the region today—Russia—and on the other side it is missing, whether it is the United States, or Europe,” he said.

Diplomats Aim for Temporary Syria Truce, Ceasefire in a Week

The head of the six-nation Gulf Cooperation Council, which includes key rebel backers Saudi Arabia and Qatar, offered a more upbeat assessment of the situation. He said the agreement to cease hostilities is a “signal of hope” and was optimistic that it could be achieved.

“It is an opportunity for us to turn our undivided attention on Daesh, which is probably the single most challenging global threat,” said GCC Secretary General Abdullatif al-Zayani, using the Arabic acronym for the Islamic State group. “This is a chance to work together on an issue that unites and doesn’t divide.”

He added that it was also an opportunity to deliver humanitarian aid desperately needed by Syrian civilians.