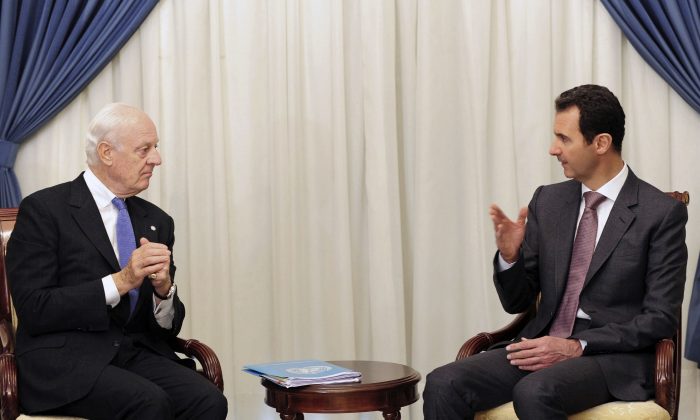 Syrian Official: State Will Make No Concessions During Talks

BEIRUT — The Syrian government will not make any new concessions in future peace talks at a time when the Syrian army is making progress in different parts of the country, a senior official in President Bashar Assad’s ruling Baath party said in remarks published Sunday.

Hilal al-Hilal’s comments come ahead of scheduled peace talks in Geneva to work on ending Syria’s nearly five-year conflict, which has killed more than 250,000 people. His remarks were published by state media Sunday.

The Geneva talks, which were to begin Monday but will likely be delayed, are part of a U.N. plan that envisions an 18-month timetable for a political transition.

The Syrian opposition says Assad should have no role in Syria’s future, even during a transitional period. Assad, whose family has governed Syria for more than four decades, has said he will only step down if voted out.

“We are not going to give today what we did not give over the past five years,” said al-Hilal late Saturday, during a visit to troops in areas they recently captured from insurgents outside the capital, Damascus.

“This year will be the year of victory for Syria because of the heroic acts and sacrifices by its army and people,” said al-Hilal.

Also Sunday, the government newspaper, Tishrin, said in an editorial that the Geneva talks should only bring in negotiators with genuine plans for rebuilding Syria, and not “representatives for the agendas terrorist-supporting countries that seek a seat for terrorism at the dialogue table.”

Tishrin was referring to Saudi Arabia, Turkey and Qatar, who are strong backers of the opposition that is trying to remove Assad from power.

On Sunday, Syrian troops captured the town of Rabiaa and the village of Rawda in the coastal province of Latakia, their latest push since Russia began airstrikes last year, according to state news agency SANA and the Britain-based Syrian Observatory for Human Rights.

Russia began its air campaign Sept. 30, and Syrian troops and allied militiamen launched a ground offensive against rebels in different parts of Syria shortly afterward, regaining control of dozen of towns and villages.

Russia has been one of the strongest supporters of Assad since the start of the uprising in 2011.