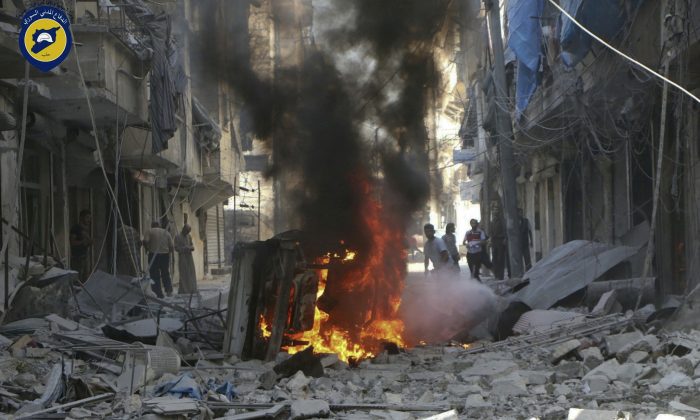 In this photo provided by the Syrian Civil Defense group known as the White Helmets, Syrians inspect damaged buildings after airstrikes by government helicopters on the rebel-held Aleppo neighborhood of Mashhad, Syria, Tuesday Sept. 27, 2016. A year after Russia waded into the war in Syria, aiming to flex its national security muscles and prop up beleaguered Syrian President Bashar Assad, Moscow appears no closer to one of its military goals: getting the U.S. to coordinate combat operations in the civil war. And prospects of a diplomatic resolution seem dim. (Syrian Civil Defense White Helmets via AP)
Middle East

The Britain-based Syrian Observatory for Human Rights says Friday the dead include civilians and fighters, among them rebel groups as well as militants from the Islamic State group and an al-Qaida-linked faction.

On Sept. 30 last year, Russia began an air campaign backing forces of the Syrian President Bashar Assad and turning the balance of power in his favor.

Opposition activists have blamed Russia for the recent air campaign against rebel-held neighborhoods of Aleppo city that has killed more than 200 civilians in the past two weeks and demolished buildings.

The Observatory says that the airstrikes have killed 9,364 people over the past year.