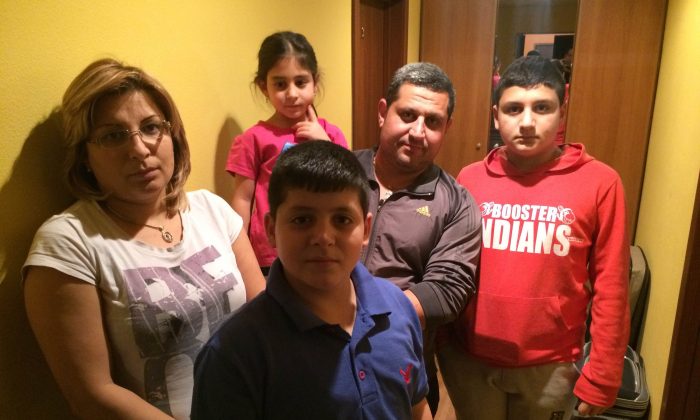 Syrian refugee Maher al-Masihi (2R) and his family pose for a photo in Murmansk, Russia, on Jan. 28, 2016. When al-Masihi and his family set out four months ago, they planned on traveling to Norway via Russia to avoid the “risky” Mediterranean sea crossing. Now, the family of five is stranded in the Russian Arctic city of Murmansk, held up by bureaucracy and border control. (AP Photo/Roman Stepanovich)
International

MURMANSK, Russia—Outside Maher al-Masihi’s rooms in the Arctic city of Murmansk, the snow is deep and the temperature far below freezing. He pulls out a smartphone and gazes at a map of Syria, where the weather is sunny and balmy. The weather aside, he is happy to be in Russia and frightened he’ll be forced back to Syria.

“We cannot go back. There’s a big war in our village, near our house,” he says.

We cannot go back. There’s a big war in our village, near our house.
— Maher al-Masihi, Syrian refugee

But al-Masihi and his family of four may be living on borrowed time in Russia. He had hoped to follow the path of thousands of other Syrians who had entered Western Europe via Russia, many of them crossing into Norway, which had been accepting asylum-seekers without visas.

Then Norway tightened its restrictions on allowing asylum-seekers to enter, and is looking at deporting some of those who have already arrived via Russia. Meanwhile, the tourist visas that al-Masihi and his family used to enter Russia have expired and Russia can force them to leave within 15 days.

Now, he said, “We are trying to go to Finland, just to be safe.”

Trying the Russia route has been crushingly expensive for al-Masihi, who said it cost about $20,000 in all for him and his family. A friend, Nihad Sadder, who is in Murmansk with three family members, said he spent $18,000.

“I sold my car in Syria. I sold everything,” said al-Masihi, who was a telecommunications engineer at home.

He said he and Sadder decided the expense was better than the risks of the perilous journey that many other Syrian migrants have taken — a sea crossing to Greece followed by land journey up the Balkans. Crossing the sea in small boats is risky and criminals prey on the migrants.

“That route is dangerous. A lot of men from our village are dead” after unsuccessfully trying to cross the sea, said Sadder, who worked in a cafe and owned a watch shop.

“Before the war, we were in a good situation,” al-Masihi said.

While asylum seekers are technically still allowed to enter Norway via Russia, the Norwegian government has begun to deport migrants with valid work or residency permits in Russia, something that has frightened off many would-be asylum seekers. Russia has also stopped allowing asylum seekers without a valid visa to cross the border to Norway.

Determined to make it through to Europe, al-Masihi and his family changed their planned route once in Murmansk, and now plan to try to go to Finland rather than Norway. But bureaucratic processes have prolonged many refugees’ stays in Russia. Some asylum seekers may wait from two weeks to a month to reach the Finnish border waiting for permission to approach border crossing points with Finland that are located beyond a Russian military zone.

As a result, hotels along the road from Murmansk to Finland are packed with waiting refugees. So far this January, 468 asylum seekers have already crossed the border from Russia to Finland, according to the Finnish border service.

Housing in local hotels is sometimes provided free of charge by a local nongovernment organization that helps foreigners in the Murmansk region, though several refugees told The Associated Press they had to pay for hotels.

Al-Masihi looks at his phone frequently. Not for the maps to see how far they have come or to mourn the home he left behind, but to check if a message has finally come in saying it’s his family’s turn to cross into Europe.