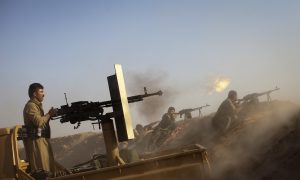 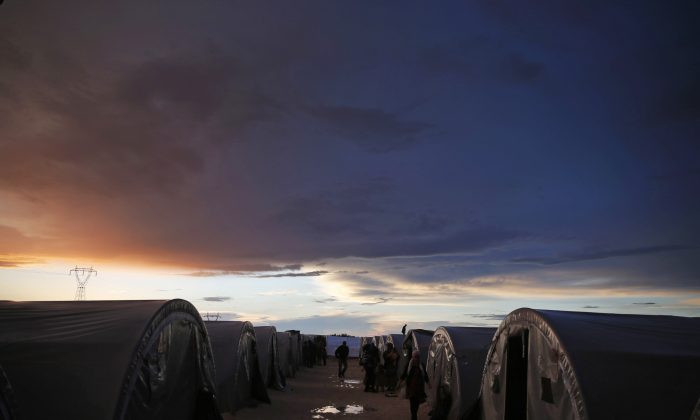 Syrian Kurdish refugees, who fled the fighting in Kobani, walk at a refugee camp in Suruc, on the Turkey-Syria border, Thursday, Oct. 16, 2014. Kobani, also known as Ayn Arab, and its surrounding areas, has been under assault by extremists of the Islamic State group since mid-September and is being defended by Kurdish fighters.The onslaught has forced more than 200,000 people to flee across the border into Turkey. (AP Photo/Lefteris Pitarakis)
Middle East

MURSITPINAR, Turkey—In its battle for the Syrian town of Kobani, the Islamic State group enjoys a key advantage: a supply of weapons, ammunition and fighters shuttling between Syria and Iraq.

The town’s Syrian Kurdish defenders, while backed by airstrikes from the U.S.-led coalition, are outnumbered, poorly armed and squeezed against the unwelcoming Turkish border. Reflecting growing desperation despite their success so far in holding out, Syrian Kurdish officials are increasingly their appeals to better arm the defenders of the strategic frontier town.

“From the start, we said the coalition’s airstrikes will not be able to save Kobani or to defeat Daesh in the area,” said Idriss Nassan, deputy head of Kobani’s foreign relations committee, using an Arabic acronym for the Islamic State group.

“We call upon the international community to open a humanitarian safe passage to allow in food, medicine, and weapons supplies,” Nassan told The Associated Press.

It’s unclear what friendly countries could do. Weapons for Kurdish fighters would have to cross through Turkey — a request the Ankara government is likely to rebuff.

The Islamic State group launched its Kobani offensive in mid-September, capturing dozens of nearby Kurdish villages and a third of the town in lightning advances that sent waves of civilians fleeing over the border into Turkey.

Bolstered by the intensified air campaign targeting the Islamic State group, Kurdish militiamen were able to regain some of the positions they lost in recent days. The U.S. Central Command said Thursday it most recently launched 14 airstrikes on Islamic State group targets near Kobani, hitting 19 buildings and two command posts, as well as fighting and sniper positions, and a heavy machine gun.

“Indications are that airstrikes have continued to slow ISIL advances, but that the security situation on the ground in Kobani remains tenuous,” the military said, using another acronym for the group.

But the Kurds fear their luck will run out without heavier weapons and more fighters to back their cause. About 3,000 to 4,000 Kurds are fighting to block the Sunni militant group from seizingKobani, according to estimates from different Kurdish fighters.

They have urged Turkey to open the border to allow members of the Kurdish militia in northwestern Syria — known as the People’s Protection Units, or YPG — to travel through Turkish territory to reinforce Kobani.

But Turkey is wary of the Syrian Kurds and their YPG militia, which it believes is affiliated with the Kurdish PKK movement in southeast Turkey that has waged a long and bloody insurgency.

This week, Turkish forces shelled PKK fighters in the country’s southeast and said the coalition should fight both the Islamic State group and the government forces of Syrian President Bashar Assad.

The Syrian Kurdish fighters, who include a few women, are armed only with AK-47s and other light weapons, according to Sirwan Kajjo, a Syrian Kurdish analyst who has been in frequent contact with frontline forces, including Salah Muslim, the leader of the Kurdish Democratic Union party.

This puts the Kurdish militiamen at a significant disadvantage against a militant group that has, over a year, managed to acquire an arsenal that includes Soviet-era tanks, Humvees, .50-caliber machine guns and at least one Scud missile — although it is unclear if the group is able to launch it.

It has also captured M46 130 mm field cannons from bases overrun recently in Syria’s Raqqa province, and artillery seized from the Iraqi military when the group seized the city of Mosul in June.

Kajjo said Muslim told him that all his fighters needed were anti-tank missiles.

“That is a legitimate request, because although (the militants) are not able to get the tanks inside the city, they are still able to shell (Kobani) with the tanks,” he said.

When the militants tried to enter Kobani this month, they turned a countryside conflict into a guerrilla battle, with the Kurds gaining the upper hand in street fights against the militant group.

The Kurds “know the lay of the land, and when they draw ISIL in close, the advantage ISIL has with its tanks and its weapons is neutralized,” said David L. Phillips, director of the peace-building and rights program at the Institute for the Study of Human Rights at Columbia University.

U.S. Rear Adm. John Kirby said Wednesday there is no resupply mission into Kobani that he is aware of. “We’re doing what we can from the air to try to support them in their effort to defend the city system,” the Pentagon spokesman said.

Syrian Kurdish groups met Wednesday in northern Iraq to discuss the siege of Kobani. The meeting was aimed at finding a joint solution to the fight against the Islamic State group among traditionally feuding Kurdish parties in Iraq and Syria.

The Britain-based Syrian Observatory for Human Rights said the death toll since the Islamic State offensive began has reached more than 660. The dead include 20 civilians, 258 Kurdish fighters, 374 jihadi fighters and nine Syrian rebels who are fighting on the Kurds’ side, it said.

“Many important roads and electricity networks also go through” Kobani, said Paul Sullivan of the Washington-based National Defense University. “It is a crucial border state from which ISIL can cause all sorts of disruptions in Turkey and Syria.”

The unprecedented move, criticized by human rights groups, underlines the desperation of Syria’s Kurds as they fight off an onslaught by the Islamic State extremist group in Kobani, a town near the Turkish border.

More than 550 people have been killed since the group began its offensive on the Kurdish town in mid-September, and the fighting has forced more than 200,000 people to flee into Turkey.

The extremists have now seized a third of Kobani, closing in on positions held by the mainKurdish militia — the People’s Protection Units, or YPG.

In majority Kurdish areas east of Kobani, Kurdish police forces known as Asayish began rounding up scores of people on Saturday, according to the Britain-based Syrian Observatory for Human Rights, handing them over to defense authorities who are holding them in schools in preparation for training.

Human Rights groups say that in addition to Kurds, many of those who have been detained include Arabs, Syriacs, Assyrians, Chaldians and Armenians.

Some young Kurds have been reluctant to answer the call to arms, opting to stay on the sidelines whether in the war against President Bashar Assad’s forces or the jihadis of the Islamic State group now attacking Kurdish areas of Syria. Those abstaining have apparently deemed it a futile fight that has more to do with bigger world powers than the forces fighting on the ground.

Mustafa Osso, a senior member of the National Kurdish Council, said police set up checkpoints and raided homes, adding that they had so far detained some 700 men under the age of 30.

“This has a direct link to what is happening in Kobani,” Osso said, alluding to Kurdish fears of being overrun by the Islamic State group militants.

Deadly attacks have taken place in predominantly Kurdish areas outside Kobani, although there has not been sustained fighting.

Osso opposes rounding up and detaining the young men, saying that historically Kurdish fighting forces have been based on volunteers, not conscription.

“This will prompt young men to immigrate,” he warned, speaking by telephone from Turkey.

The Kurds, long ostracized in Syria, took advantage of the chaos of the country’s civil war to carve out a semi-autonomous territory in the north.

In November, they declared their own civil administration in areas under their control, dividing it into the regions named Afrin, Kobani and Jazeera.

In mid-July, Kurdish authorities in Jazeera imposed a compulsory six-month military service on adult males in order to bolster forces fending off Islamic extremists. Although the area is majorityKurdish, Arab, Armenian and Christian minorities living in the area are also required to do the service.

Ekrem Hasso, an official at the Jazeera administration, said that the administration is “committed to implementing its laws.” He acknowledged however that Asayish police forces may have shown “some bad behavior” at some checkpoints. He did not elaborate.

The Observatory said the young men will be referred to defense officials who will conduct medical tests and interview them for military service.

“We call upon the civil administration to immediately release the detainees without conditions and to abstain from such practices,” they said in an emailed statement.

From The Associated Press. AP writers Diaa Hadid in Beirut, Desmond Butler in Istanbul and Robert Burns in Washington contributed to this report.