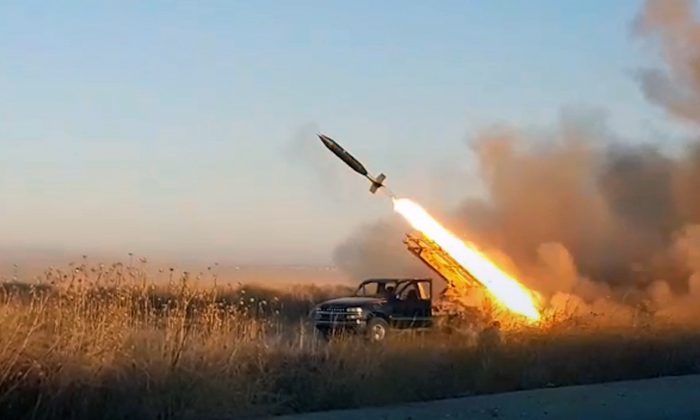 BEIRUT—The main U.S.-backed Syrian Kurdish militia has begun withdrawing its fighters from two towns near Turkey’s border, part of a deal for a so-called safe zone in northeastern Syria involving the U.S. and Turkey, the Kurdish-led regional administration in northern Syria said Aug. 27.

Turkey has been pressing for a safe zone, running east of the Euphrates River toward the Iraqi border, to push U.S.-allied Syrian Kurdish militias away from its frontier. Turkey wants to control—in coordination with the U.S.—a 19-25 mile (30-40 kilometer) deep zone within civil war-ravaged Syria.

Turkey sees the Syrian Kurdish fighters, who make up the majority of the Syrian Democratic Forces and are allied with the U.S., as terrorists aligned with a Kurdish insurgency within Turkey. American troops are stationed in northeast Syria, along with the Kurdish forces, and have fought the ISIS terrorist group together.

The differing positions on the Kurdish fighters have become a major source of tension between NATO allies Turkey and the U.S.

The administration said, “the first step” in these understandings began three days ago in the town of Ras al-Ayn, from where members of the militia known as YPG withdrew with their heavy weapons. The statement that was read by Zeidan al-Assi, head of defense office at the administration, added that similar steps were taken Aug. 26 in the border town of Tal Abyad.

It said the Kurdish militia positions were taken over by local forces, without elaborating.

In northwest Syria, Syrian insurgents launched counterattacks Aug. 27 in and near areas recently taken by government forces in the country’s last remaining rebel region, after a series of setbacks they suffered in recent weeks, opposition activists said.

The fierce fighting killed more than 50 fighters on both sides, according to the Britain-based Syrian Observatory for Human Rights. It also underscored that President Bashar Assad’s forces will face a long, hard fight as they try to chip away at the last rebel-held territory.

The counterattacks began early in the morning and government forces called in Syria’s air force to repel them, the Observatory said. It said 29 Syrian troops and pro-government gunmen were killed, as well as 23 insurgents.

The insurgents captured two villages, Salloumieh, and Abu Omar, and pushed into the nearby village of Sham al-Hawa, it said.

The Ibaa media outlet of the al-Qaida-linked Hayat Tahrir al-Sham terrorist group said its fighters were attacking Syrian positions east of Khan Sheikhoun, a major town that was held by rebels until they lost it last week.

Pro-government activists said on social media that Syrian troops and pro-government gunmen are repelling the attack.

Syrian government forces captured wide areas from insurgents over the past weeks in an offensive that began on April 30. The areas taken include all rebel-held parts of Hama province as well as villages on the southern edge of Idlib, the last remaining rebel stronghold in Syria.

The Aug. 27 clashes came after Syrian warplanes pounded the rebel-held town of Maaret al-Numan and nearby villages over the past two days—their likely next target for takeover.

Maaret al-Numan, like Khan Sheikhoun, sits on the highway linking Damascus with the northern city of Aleppo, Syria’s largest. Government forces are trying to eventually open that highway.

Taher al-Omar, a citizen journalist with the al-Qaida-linked terrorists, wrote on social media that they have carried out several suicide attacks so far.

The months of fighting have displaced more than half a million civilians toward northern parts of Idlib, already home to some 3 million people, according to U.N. humanitarian officials.

Elsewhere in northern Syria, a bomb exploded on a minibus, killing two people and wounding nine near the town of Azaz. The town is controlled by Turkish troops and Turkey-backed opposition fighters, according to pro-government media and the Azaz media center, an activist collective.