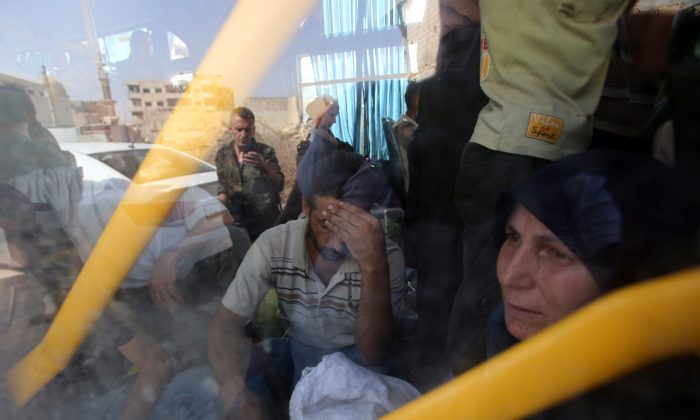 People are seen inside a bus, as they are being evacuated from the town of Daraya outside the capital Damascus on Aug. 26, 2016, under a deal agreed between the government and opposition fighters after a four-year army siege. (Youssef Karwashan/AFP/Getty Images)
Middle East

BEIRUT—Once hubs of the Syrian uprising, the country’s rebellious capital suburbs are submitting to government control at a quickening pace, in a sign that the military’s grinding siege tactics are paying off.

The latest Damascus suburb to fall was Moadamiyeh, which relented after three years of siege as food supplies dwindled for its estimated 28,000 residents and key infrastructure like hospitals were destroyed.

On Friday, implementation began in the deal, under which rebel fighters will move to opposition-held territory in the north and government security forces will move into the town, just a short drive southwest of the capital. The neighboring suburb, Daraya, surrendered and came under government control last week.

The accelerating pace of such surrenders points to how the Syrian military is tightening the screws on besieged areas, stepping up attacks on civilian infrastructure and refusing entry of critical medical supplies, despite sharp criticism by the U.N., which has tried to bring in humanitarian aid.

Surrender under such deals is “bitter salvation,” forced on residents through collective punishment, said a former resident of the besieged mountainside town of Zabadani.

“The regime’s strategy is clear,” said Ibrahim Abbas, an opposition activist who was exiled to rebel-held Idlib province as a condition to receiving treatment for a war wound. “A suffocating siege to foment hatred (among residents) toward activists and fighters, then an offer to evacuate.”

The deals at Daraya and Moadamiyah free up Syria’s military resources for other fronts, including the defense of the central city of Hama, which came under unexpected attack by rebels this week, and the siege of opposition areas in the capital’s eastern suburbs.

The ultimate goal appears to be to wipe out the relatively isolated rebel-held pockets around central Syria, effectively leaving just the main opposition-held heartland of Idlib province in the northwest and enclaves in the south.

The governor of the Damascus countryside province, Alaa Munir Ibrahim, said deals with other rebellious suburbs are under discussion. At least 16 areas around the country—home to more than a half-million people—are under siege, almost all by government forces except for a few locations.

A U.N. humanitarian official warned Thursday that the town of Madaya, northwest of Damascus, and al-Waer, the last opposition neighborhood in the central city of Homs, could be the next to capitulate under siege, along with Foua and Kafraya, two pro-government towns in the north besieged by rebels.

Jan Egeland in Geneva said the U.N. had failed to neutralize what he has previously called a “medieval” tactic.

“A siege is not broken by the population giving up after starvation and bombing; a siege is lifted by humanitarian access and freedom of movement, in and out, by the civilian population,” said Egeland.

Daraya residents say the destruction of the suburb’s only remaining hospital earlier this month in a government strike was one factor compelling them to leave their homes in a surrender.

An offensive launched this June against Daraya aggravated a siege in place since 2012. Last week, the remaining residents of the suburb—about 4,000 people out of an original population of 200,000—were removed under the surrender agreement, drawing criticism that it was a forced displacement.

On Monday, it was announced that Homs’ al-Waer neighborhood had entered into talks with the government, though no agreement has yet been reached.

One of al-Waer’s last hospitals was bombed Aug. 21, according to Homs area media activist Abu al-Diya. The staff of another resigned en masse Tuesday night, saying they had no more supplies.

“We were reusing syringes, sometimes two or three times,” said one doctor Abu al-Bishr. He and the activist both used nicknames to protect themselves and loved ones.

A U.N. relief convoy reached al-Waer in August but, as with most U.N. convoys in operating in Syria, was prohibited by the government from delivering medical supplies.

It was fortunate to get any aid: In August, convoys were unable to reach 15 of the 18 besieged areas.

The back-to-back surrenders of Daraya and Moadamiyah and news of negotiations for al-Waer could trigger a wave of agreements as the psychological toll of defiance mounts.

Moadamiyeh had endured a siege that included what a U.N. report said was an attack by toxic sarin in 2013. But it surrendered after resistance collapsed in neighboring Daraya, said Moadamiyeh media activist Dani Qappani.

“We became the last remaining opposition area” in the area west of Damascus, he said.

On Friday, more than 300 Daraya residents who had been trapped in Moadamiyeh were taken in buses to government-held areas, along with several dozen fighters who decided to lay down their weapons.

Though the bulk of the population will stay, Qappani said he and hundreds of other activists would have to leave, saying he wouldn’t feel safe under the government’s fearsome security services.

“There will be no return until Assad leaves,” he said.

The government registered its first success in May 2014, against the old city neighborhoods of Homs. After bombardment drove tens of thousands of civilians out in 2012, the government enforced a siege so tight that residents were digging up shrubs from the cemetery to eat and gunmen raided homes for food.

The districts gave up after 700 days. Fighters agreed to leave, and remaining residents accepted the government’s authority. Hundreds of men were also arrested.

One of the first areas to cast out the government’s security forces in 2012, Zabadani had been under siege for years when it came under a powerful assault by government troops and allied fighters from Lebanon’s Hezbollah in 2015. Most residents fled to nearby Madaya, although some 120 fighters are still besieged in the town center.

But Madaya, too, is under a crushing siege, enforced by snipers who pick off residents as they try to collect food from groves. Pro-government forces burned vital farmland in June.

At least a dozen deaths due to under-nutrition and the scarcity of medical supplies have been recorded. Egeland, of the U.N., said there is believed to be a meningitis outbreak in the battered town.

“There is talk between people of returning to ‘the nation’s embrace,'” said local media activist Abdel-Wahhab Ahmad, using the government’s euphemism for surrender.

The U.N.’s special envoy to Syria, Staffan De Mistura warned the international community that agreements under these terms could lead to even larger displacements.