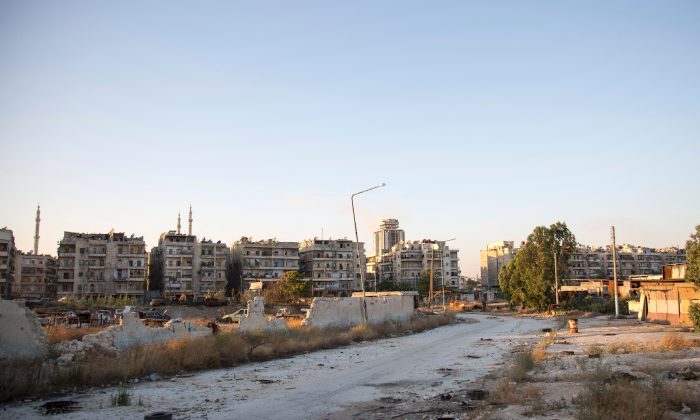 BEIRUT—Dozens of families and some opposition fighters started leaving besieged rebel-held neighborhoods in the northern Syrian city of Aleppo on Saturday after the government opened safe corridors for civilians and fighters who want to leave, state media reported.

The government completely closed the main road into rebel-held areas of Aleppo on July 17, effectively besieging the 300,000 people living there.

Earlier this week, Syrian President Bashar Assad offered an amnesty to rebels who lay down their arms and surrender to authorities in the next three months.

Opposition activists denied reports that Aleppo residents were leaving rebel-held neighborhoods of the city, saying that state media was attempting to falsely suggest that civilians were fleeing the area in large numbers.

Syrian TV footage appeared to show dozens of people leaving, a small proportion of the hundreds of thousands of people still living in besieged eastern neighborhoods of Aleppo.

About a dozen young men were shown on state TV surrendering to government forces. All had covered their faces, and most were carrying automatic rifles over their head. As the men walked out of a building, Syrian government soldiers pointed their rifles toward them.

State TV also showed dozens of women and children arriving in a street lined with heavily damaged buildings in the government-held part of Aleppo’s Salaheddine neighborhood. State news agency SANA said the civilians later boarded buses and were taken to shelters set up by the government on the western side of Aleppo.

SANA said some fighters came forward to government forces stationed in Salaheddine, where they handed over their weapons and surrendered to authorities. Usually surrendering fighters are questioned by government authorities and then sign a pledge promising not to take up arms against the Syrian state again.

“We are feeling good now because we are under the protection of the army, may God protect them. We suffered a lot in order to be able to come here,” a Syrian woman told state TV after leaving rebel-held parts of Aleppo, Syria’s largest city and once commercial center.

State media said that large numbers of people were being prevented by militants from leaving rebel-held parts of the city.

The Russian military said 169 civilians have left Aleppo through the three safe corridors since they were set up, including 85 on Friday and 52 more on Saturday. In addition, 69 fighters have left after laying down their arms, Lt. Gen. Sergei Chvarkov, who heads the Russian center for reconciliation located in Latakia military base, said in a statement. He said four more corridors were in the process of being created.

The Syrian government has set up six shelters that can accommodate at least 3,000 people, he said.

Aleppo-based opposition activist Baraa al-Halaby denied reports that civilians and fighters have left to government-held parts of the city.

“This is a game by the regime. Not a single person left,” al-Halaby said. “The regime wants to say that civilians have left in order to burn Aleppo.”

The Local Coordination Committees, a Syrian opposition monitoring group, denied that civilians and fighters were heading to government areas of the city. The Britain-based Syrian Observatory for Human Rights confirmed that people have left opposition areas but had no numbers.

The evacuation came a day after U.N. special envoy for Syria Staffan de Mistura urged Russia to leave the creation of humanitarian corridors around Aleppo to the United Nations and its partners. His comments were seen as a gentle snub to Moscow, which had made the proposal a day earlier as pro-government troops tightened their encirclement of rebel-held parts of the northern Syrian city.

In comments carried later Friday by Russia’s Interfax news agency, deputy defense minister Anatoly Antonov said that Russia was willing to work with the U.N. on setting up the corridors. He said that Russia is “ready for close and constructive cooperation with all international humanitarian organizations and, of course, with the office of the U.N. special envoy on Syria.”

Opposition activists meanwhile reported airstrikes on several towns and villages in Aleppo province, including the village of Ibin where at least six people were killed according to the Observatory and the LCC.