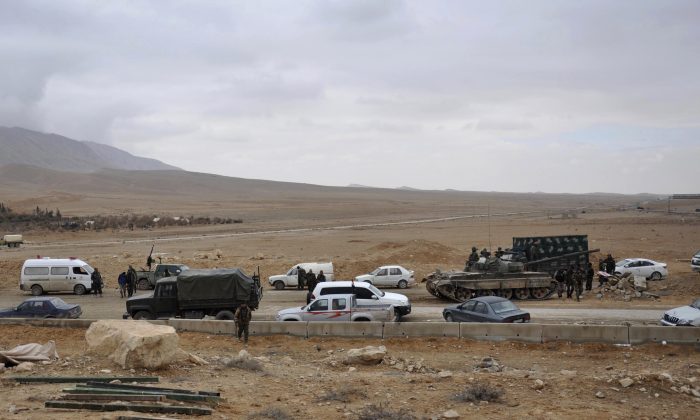 Syrian forces take up positions during fighting between Government forces and ISIS terrorists in the ancient city of Palmyra, near Homs, Syria on March 2, 2017. (SANA via AP)
International

BEIRUT—Syria’s military announced on Thursday it has fully recaptured the historic town of Palmyra from the Islamic State group as the militants’ defenses crumbled and ISIS fighters fled in the face of artillery fire and intense Russia-backed airstrikes.

The development marks the third time that the town—famed for its priceless Roman ruins and archaeological treasures IS had sought to destroy—has changed hands in one year.

It was also the second blow for the ISIS group in Syria in a week, after Turkish backed opposition fighters seized the Syrian town of al-Bab from the militants on Feb. 23, following a grueling three month battle. In neighboring Iraq, the Sunni extremist group is fighting for survival in its last urban bastion in the western part of the city of Mosul.

For the Syrian government, the news was a welcome development against the backdrop of peace talks underway with the opposition in Switzerland.

“You are all invited to visit the historic city of Palmyra and witness its beauty, now that it has been liberated,” the Damascus envoy to the U.N.-mediated talks, Bashar al-Ja’afari, told reporters in Geneva.

“Of course, counterterrorism operations will continue until the last inch of our territory is liberated from the hands of these foreign terrorist organizations, which are wreaking havoc in our country,” he added.

The Damascus military statement said troops gained full control of the desert town in central Syria following a series of military operations carried out with the help of Russian air cover and in cooperation with “allied and friendly troops”—government shorthand for members of Lebanese militant Hezbollah group who are fighting along Syrian President Bashar Assad’s forces.

ISIS defenses around Palmyra had begun to erode on Sunday, with government troops reaching the town’s outskirts on Tuesday. The state SANA news agency reported earlier that government troops had entered the town’s archaeological site, a UNESCO World Heritage Site, around mid-day, then the town itself, as ISIS militants fled the area.

This is the Syrian government’s second campaign to retake Palmyra. It seized the town from Islamic State militants last March only to lose it again 10 months later.

Before the civil war gripped Syria in 2011, Palmyra was a top tourist attraction, drawing tens of thousands of visitors each year.

The Kremlin spokesman, Dmitry Peskov, had said earlier that Russian President Vladimir Putin was informed by his defense minister that Syrian troops had gained control of Palmyra, with support from Russian warplanes.

The Syrian government’s push has relied on ground support from Hezbollah and Russian air cover, according to Hezbollah’s media outlets.

Archeologists have decried what they say is extensive damage to its ruins.

Drone footage released by Russia’s Defense Ministry earlier this month showed new damage to the facade of Palmyra’s Roman-era theater and the adjoining Tetrapylon—a set of four monuments with four columns each at the center of the colonnaded road leading to the theater.

A 2014 report by a U.N. research agency disclosed satellite evidence of looting while the ruins were under Syrian military control. Opposition factions have also admitted to looting the antiquities for funds.

ISIS militants have twice used the town’s Roman theater as a stage for mass killings, most recently in January, when they shot and beheaded a number of captives they said had tried to escape their December advance. Other ISIS killings were said to have taken place in the courtyard of the Palmyra museum and in a former Russian base in the town.

The developments in Palmyra came against the backdrop of the talks in Geneva, which have been without any tangible breakthroughs so far. Diplomats and negotiators have set their sights on modest achievements in the latest round, after a week of discussions centering on setting an agenda for future talks.

On Thursday, U.N. Special Envoy to Syria Staffan de Mistura held another round of meetings with both the government delegation and opposition groups.

Russian Deputy Foreign Minister Gennady Gatilov told reporters Wednesday that “the parties have agreed to … discuss all issues in a parallel way, on several tracks.”

After a Damascus request, the issue of terrorism is also on the table, he had said. Russia is a key sponsor of Assad’s government.

A top Syrian opposition negotiator, Nasr al-Hariri, said the talks would likely culminate in a closing ceremony on Friday and the parties may be back in Geneva for further discussions in a few weeks.

Setting the agenda and strategy to guide discussions has proven difficult as the main conflicting parties dig in their heels over form and semantics.

In Turkey, the country’s foreign minister said that with the completion of an operation to retake the IS-held town of al-Bab in northern Syria, Turkish troops will head to the Syrian town of Manbij next, to oust U.S.-backed Syrian Kurdish forces that Ankara views as terrorists and a threat to Turkey.

Foreign Minister Mevlut Cavusoglu said Thursday that Turkey would not shy away from attacking the Kurdish group that dominates the Syria Democratic Forces, which captured Manbij last year after weeks of deadly fighting with ISIS.

He renewed calls for the new U.S. administration not to support the Kurdish forces. Cavusoglu stressed that an operation to take Manbij had not started yet, but acknowledged that skirmishes between Turkish-backed forces and the Kurdish fighters may have occurred.

That front line in northern Syria was further complicated by a concurrent announcement by the Syrian Kurdish side on Thursday that they had agreed with Russia to withdraw from some of the territory between al-Bab and Manbij, to make room for a buffer.

The Manbij Military Council, part of the Kurdish-led Syrian Democratic Forces, said that under the deal, they will withdraw from a front line with rival Turkish-backed forces near the Euphrates River. This will allow Syrian government forces to create a buffer between them.

However, Cavusoglu denied any such agreement was reached.

There was no immediate comment from the Syrian government. The Turkish and Syrian authorities have long regarded each other with thinly-veiled hostility.