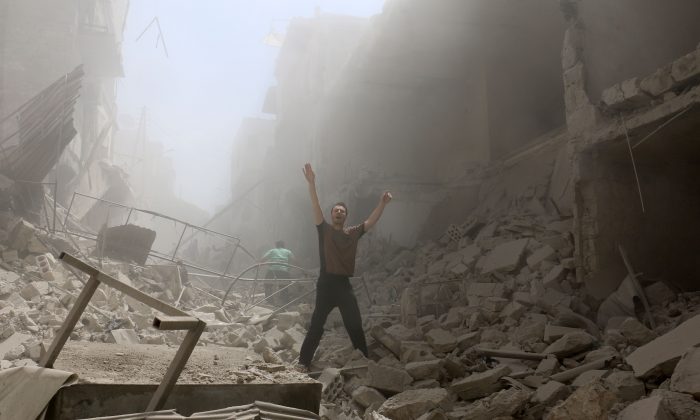 A man gestures amid the rubble of destroyed buildings following a reported airstrike on the rebel-held neighborhood of al-Kalasa in the northern Syrian city of Aleppo, on April 28, 2016. (Ameer Alhalbi/AFP/Getty Images)
Middle East

BEIRUT—Suspected government airstrikes on a rebel-held part of Syria killed at least 25 people on Saturday, in what appeared to be retaliation for the capture and killing of a fighter pilot the day before, Syrian activists said.

The Local Coordination Committees, an activist network, counted seven medical personnel among those killed in the town of Jeiroud, northeast of Damascus. It says the town was struck at least 40 times since early Saturday. The Britain-based Syrian Observatory for Human Rights put the toll at 31 dead.

Rebels captured and interrogated a fighter pilot on camera in Jeiroud on Friday, after his plane crashed in the area. Observatory head Rami Abdurrahman said local officials were negotiating the pilot’s release with the government, but photos circulated online later showed he was shot and killed.

The government says the pilot was on a training mission when his plane malfunctioned.

The besieged Damascus suburb of Harasta, where an estimated 12,500 people now reside, meanwhile received its second aid convoy in three days, according to the Syrian Arab Red Crescent, which directed the convoy with the U.N.

The 17-truck convoy carried food and medical supplies, the SARC said. A smaller convoy had delivered supplies to the suburb, which is besieged by government forces, on June 29.

A U.N. official meanwhile warned that residents in Madaya, another besieged town outside Damascus, could again suffer from starvation if aid is not delivered there soon. An estimated 40,000 people are trapped inside the mountain resort town, which is encircled by government and Lebanese Hezbollah forces.

Humanitarian aid adviser Jan Egeland said Thursday that an independently negotiated agreement between rebels and the government to deliver aid and make medical evacuations in Madaya and three other towns, two besieged by the rebels and one by government forces, was no longer holding, putting the residents of Madaya at risk.

A schoolteacher inside Madaya said residents were surviving on the summer’s vegetable harvest. “We need eggs, nutrients, and milk,” said Wafiqa Hashem.

Images of starvation transmitted from Madaya last winter sparked an international outcry against sieges on civilian areas in the Syria war, now in its sixth year. Doctors Without Borders said 16 people died of starvation or for want of immediate medical care in Madaya in January.

An estimated half million people are trapped in eighteen areas the U.N. classifies as besieged, though the independent monitoring group Siege Watch puts the number at one million. Government forces and allied militias are responsible for most of the sieges, according to observers.

It was not until late June that the U.N. was able to reach the last of the eighteen areas with aid, and officials say they need sustained access, not one-off deliveries. Madaya has not received relief since April 30.

Hashem said the town had run out of plastic, wood, and combustibles to burn for fuel, and that residents were burning blankets in order to cook.