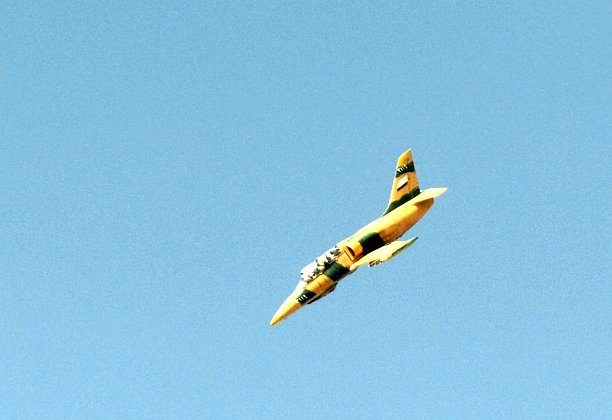 A Syrian army fighter jet flies over the northern city of Aleppo on October 13, 2012. Syria’s military has stepped up its use of the widely banned cluster bombs during battles against rebel forces. (Tauseef Mustafa/AFP/GettyImages)
Middle East

Syria’s military has stepped up its use of the widely banned cluster bombs during battles against rebel forces, Human Rights Watch reported Sunday.

The watchdog said that video evidence uploaded to YouTube by Syrian activists last week shows that the military is using cluster bombs to quash rebel forces from advancing along Syria’s main north-south highway. Syria has primarily used cluster bombs that were manufactured in what was then the Soviet Union, but it is unclear as of yet how the regime obtained them.

“Cluster munitions stand out as the weapon that poses the gravest dangers to civilians,” according to the Cluster Munition Coalition.

Cluster bombs can be deployed via air or ground and sometimes release hundreds of smaller munitions, or “bomblets.” Because the bomblets spread so widely, they indiscriminately kill both civilians and enemy combatants. They pose an extreme risk to civilians because many bomblets do not detonate on impact and are turned into mines that can kill and maim people even years after they were deployed.

In 2008, 107 nations adopted the Convention on Cluster Munitions to ban use of the bombs. The convention is now legally binding in 94 of those nations. Syria did not participate.

Human Rights Watch (HRW), interviewed several residents in the towns of Taftanaz and Tamane`a in northern Idlib Province. The residents confirmed that Syrian helicopters dropped the munitions in the region on Oct. 9. The group had no information about casualties.

“Syria’s disregard for its civilian population is all too evident in its air campaign, which now apparently includes dropping these deadly cluster bombs into populated areas,” said Steve Goose, arms director at HRW, according to the group’s website.

In the at least 18 videos that HRW cited, children and other civilians could be seen handling unexploded cluster bomblets, which is extremely dangerous because they can be triggered just by touching them. The group confirmed that Syria’s military is using the Soviet-made RBK-250 series cluster bombs.

Syria possesses RBK-250/275 and RBK-500 cluster bombs, according to records from a publishing company specialized in military topics, said the HRW report.

An unnamed resident in Taftanaz told Human Rights Watch that regime forces have continuously attacked the town for six weeks. Last week, a helicopter “dropped a [bomb] and as it fell it broke into half and released smaller [bomblets]. I heard one [initial] explosion. But after the submunitions were released I heard several [further] explosions,” he told the rights group.

He said that approximately 30 unexploded bomblets were present when he went to the site. Another resident said that a rebel in the Free Syrian Army told him that 20 unexploded munitions were discovered around Taftanaz.

Undetonated bomblets continue to affect civilians in a number of nations years after they were initially used in warfare.

Amy Little, campaign manager for the Cluster Munitions Coalition is quoted on the coalition’s website: “As we have seen in Lao PDR, Lebanon, Iraq, Serbia, and elsewhere, cluster munitions have a devastating impact, both at the time of use and for years after a conflict ends, and they will only prolong civilian suffering in Syria. It is for this reason cluster bombs have been recognized as unacceptable—under all circumstances—and banned by the vast majority of the world.”