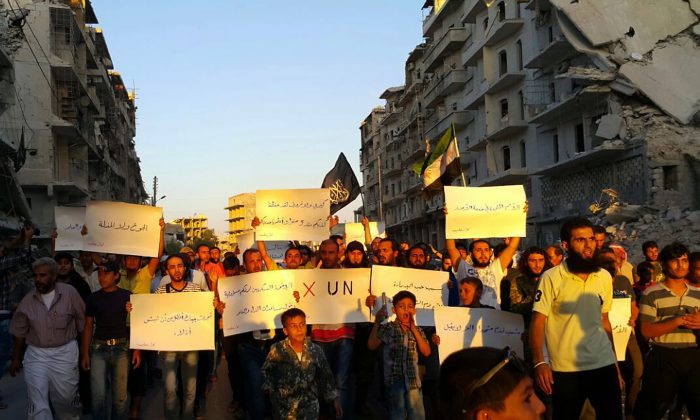 In this file photo, activists in Syria's besieged Aleppo protest against the United Nations for what they say is its failure to lift the siege off their rebel-held area on Sept. 13, 2016. (Modar Shekho via AP)
International

Syria Truce Hangs in the Balance Amid Attacks, Lack of Aid

BEIRUT—Syria’s week-long cease-fire, brokered by the United States and Russia, was in doubt Monday amid repeated violations and with no aid deliveries to the besieged rebel-held part of the northern city of Aleppo, a key point in the agreement.

The uncertainty cast doubts on a U.S.-Russian plan to set up a coordination center that would plan strikes against militants in the country.

The two sides, which brokered the truce earlier this month, had said that if it holds for seven days, it would be followed by the establishment of a Joint Implementation Center for both countries to coordinate the targeting of Islamic State and al-Qaida-linked militants.

As violations mount, a senior opposition official declared the cease-fire “clinically dead,” adding that government forces have violated the truce all over the country.

For its part, the Syrian army, which endorsed the U.S.-Russia deal, had said in a statement that the cease-fire would end at midnight Sunday. Damascus has since announced no extensions of the truce.

On Sunday, rebel-held parts of Aleppo were targeted in aerial attacks for the first time since the truce went into effect, leaving a woman dead and several people wounded, according to opposition activists. A helicopter attack on the southern village of Dael killed at least eight people, activists said.

It was not clear who carried out the attacks.

On Monday, the opposition reported 254 violations by government forces and their allies since the truce started on Sept. 12. Syrian state media said there were 32 violations by rebels on Sunday alone.

George Sabra, of the opposition High Negotiations Committee, told The Associated Press on Monday that the truce has been repeatedly violated and did not succeed in its main objective — opening roads for aid to enter besieged rebel-held areas.

“Hundreds of thousands of people in Aleppo are waiting for this truce to allow aid to enter the city,” he said, adding that there are aid trucks still waiting on the Turkey-Syria border. “I believe that the truce is clinically dead.”

Erdogan said the Syrian opposition forces, backed by Turkish troops and tanks, are determined to advance toward al-Bab to clear the region of terror threats. The offensive, he said, will last until the area “is no longer a threat” to Turkey.

Last month, Turkey for the first time sent tanks across the border into Syria to help rebels clear territory of IS militants and to contain the expansion of a Syrian Kurdish militia.