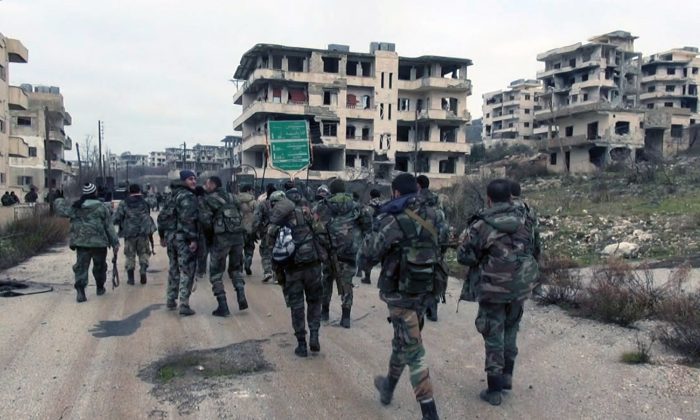 BEIRUT—Syrian army troops recaptured a new village north of Aleppo Monday, bringing troops and allied militiamen to within a few kilometers of the Turkish border as part of a major Russian-backed offensive in the area, the Syrian government and opposition activists said.

State-run news agency SANA said army troops took control of the village of Kfeen in the northern countryside of Aleppo “after wiping out the last group of terrorists there.”

The government offensive around the city of Aleppo has sent tens of thousands of Syrians fleeing toward the border with Turkey. Turkish authorities say up to 35,000 Syrians have massed along the border, which remained closed for a fourth day on Monday.

Turkey has come under mounting pressure to open its border to assist the fleeing Syrians, many of whom have been sleeping in cold weather in open fields near the Bab al-Salameh border crossing.

The Turkish deputy premier said Sunday that Turkey has reached the end of its “capacity to absorb” refugees. The governor of the Turkish border province of Kilis said that Turkey would provide aid to the displaced within Syria, but would only open the gates in the event of an “extraordinary crisis.”

The army gains have allowed troops to almost fully encircle Aleppo, Syria’s largest city and one-time commercial center, preparing the way for a blockade. The main supply line to the Turkish border has already been cut and many residents of the city were looking to leave, anticipating severe shortages in the coming days.

The army has been aided by massive Russian airpower and dozens of fighters from the Lebanese Shiite Hezbollah group as well as Iranian fighters.